High level baseball players have a secret weapon when it comes arm health and recovery.

You know that feeling… when you’re not at your best, but you still need to go out there and perform?

If you say can’t pitch because your arm is a little sore, you feel like you’re “that guy.” The wimp. The guy who can’t take a little pain. The guy who cares more about his stats than the team. Or worse, the guy who’s always getting hurt, so a team won’t take a chance on someone so injury prone.

But if you aren’t bringing your best stuff, that letting the team down too – right?

Not to mention, at the end of the year, it’s the numbers on paper that people see. Nobody is going to know you weren’t at your best because your arm was hurting. They’re going to think that’s how you perform – end of story.

The truth is, you WANT to work hard, to train hard, and compete to WIN… win games, win scholarships, win respect.

Playing at less-than-your-best because of arm pain stinks.

And you’re not alone – 75% of players between 8 and 18 are playing with preventable arm pain!

Enter the obsession with post-game recovery.

“The issues of improper recovery are more apparent for baseball pitchers than for other athletes, because tissue fitness plays a major role in stabilizing joints and tendons in the throwing arm. Decreased command and velocity are two immediate signs a pitcher hasn’t properly recovered. When a guy just doesn’t seem to “have it” on a given day, inadequate recovery could be the culprit.” (source)
In our last email, we ranked recovery methods from worst to best, ending with EMS, which I promised to talk more about.

Pro teams and the top pitching programs have begun using Electrical Muscle Stimulation for more than just injury recovery. They’re now using them to the speed recovery of athletes in rigorous training programs, and the results have been really exciting.

I could share the scientific studies, but I think this story from a very reputable pitching program in Washington is one of my favorites:

On Mondays during the off-season, pitchers at Driveline typically throw an extended bullpen session. Boddy decided to split the pitchers into two groups—one would use the Marc Pro for 15 minutes after their session, the other would not.

To measure the effect that the Marc Pro had on recovery, Boddy tested the pitchers’ grip strength and internal rotation power—two markers linked to worse command and a higher chance of injury.

When he compiled the data, the results were clear: the pitchers who had used the Marc Pro recovered faster. “The differences were significant. Grip strength was restored much quicker in athletes that used the Marc Pro for at least 15 minutes in a local area, and internal rotation power improved as well,” Boddy says.

His clients’ subjective reports had now been supported by objective data, and Boddy was sold.

Driveline now has eight Marc Pro units, and Boddy say it’s the most used recovery device they own. The Marc Pro helped Casey Weathers, a prospect in the Cleveland Indians organization, overcome multiple arm surgeries to throw a baseball 108 mph this past winter. 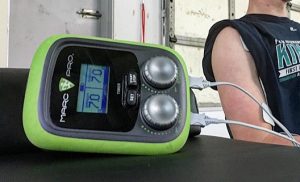 There are plenty of other EMS machines out there, some of which are less expensive, but this the one I used during my time with the Yankees. It’s the one MLB teams are using, and it’s got impressive research to back up it’s effectiveness.

BONUS – I spoke to Marc Pro, and they’ve generously provided a 5% off discount on Marc Pro device. Just use this discount code pbirecover when you’re checking out at Marc Pro.com.  Also, a portion of your purchase is given to PBI, to support the 100’s of pages of free baseball instruction from the pros.

PS. If you have any questions or comments, just reply to this email. I don’t often have time to record or write new stuff during the baseball season, but I try to make emails from you a priority.