Thank you for all the awesome questions that were submitted for the #askWally interview.  Whether you’re a player or a coach, this should be interesting to you.

Wally Joyner is the current hitting coach for the Detroit Tigers, as well a former All Star who played 1st base in the Major Leagues for 16 years.

Audience question #1 (Jenny Veres): “How do you teach hitters to get the barrel on the plane of the ball? Staying longer in the zone and creating a line drive swing?”

WJ: I think that tee-work helps quite a bit, because you are practicing muscle memory. What you want to do is have both the hands and the knob lead the swing, and everything else will follow.  Your direction is to take the knob to the inside part of the ball, and the swing creates itself.

Audience question #2 (Joe Edwards): “I find with young hitters moving up into more competitive baseball, as they get older, it’s more difficult to teach them timing. When to load, how to identify a good pitch to hit, etc. Are there any drills you recommend that can touch on this area?”

WJ: All the drills touch on that area, as far as timing is concerned. I think the one thing you are seeing is players panicking with their swing because the velocity of the baseball is faster, and they think they need to swing faster or quicker. The reality is they just need to get ready sooner and give themselves as much time as they can to see the ball. The correct way of doing this is to just to get ready and load sooner, so that they have more time to pick the ball up.

Audience question #3 (Chris Beneke): Would you like to see more young players emulating your closed stance and tilt (toward the plate) in the torso when they’re at the plate? It seems that you and Don Mattingly had quite a bit of success with that approach.

WJ: If that helps a player become successful, yes, but there’s no correct way to hit or swing. Every player’s body is different.

As a player and as a coach, you have to find the best stance and position to allow a hitter to be successful.

Q4: What is a basic mental approach that a hitter can take with him to the plate in order to compete.

WJ: The approach that I like to use is a consistent setup. You want to setup to prepare for a pitch that you’re going to hit middle-away. So for a right hander, that means between 2b and 1b. As a left-hander, between 3B and SS. From there, you want to load early and get ready.

Focus on the release point of the pitcher. Identify if the pitch will be inside or outside, and identify the type of pitch. If you choose to swing, hit it where the pitcher throws it. You need to have a consistent approach. It keeps you in control, rather than being a defensive hitter. We don’t want that.

Q5: What tips do you have for coaches to teach confidence when players are struggling?

WJ: Part of the pedigree of a successful coach is to stay confident always.

Another trick is to never forget how difficult it is to play the game, especially at higher levels.

Young coaches should keep it fun. Allow it to be a game always. As you coach older players, and young men, be there confidant and give them your time to make them better. Overall, I think a coach’s first responsibility is to always stay positive.

Q6:  What is the most common problem you see in a young player’s swing?

WJ: I have a handful of things I look for in a player’s swing. For example, if the grip is too tight, if the barrel is not angled properly, if the player is not loading properly, and if his weight transfer is correct. Those are the main parts of the swing I look at in order to quickly evaluate a player at the beginning of a session.

Q7: You guys obviously do video analysis in the bigs; how can it help young kids improve?

WJ: I think you have to be careful with analyzing swings.

You’re always going to find a flaw in a swing, because until the pitcher tells us what he’s throwing and the velocity he’s throwing, we’re still guestimating what that pitch is.

As perfect as we want to be, that pitch will prevent us from being perfect.

Video analysis is good, but with the mentality of understanding if the pitch was the right pitch to swing at.

Check out this product review on the Swing Tracker bat sensor

Q8:  What is your most memorable moment at the ballpark?

WJ: My first year overall with the California Angels was a very exciting time for me. The ballpark was always a place I wanted to be at, and still is even today. I enjoy going to the ballpark because I enjoy the game and watching players compete at the highest level. You see great things every time you go to a baseball game.

My first homerun in Seattle was very memorable. Making the All-Star Game my first year [in 1986]was memorable. I have no complaints about my opportunities playing this game.

Want to see Wally Joyner critique my swing?  Click here to watch his video analysis of my baseball swing, and be sure to subscribe to our channel while you’re there.  Lot’s of good pro video tips coming soon! 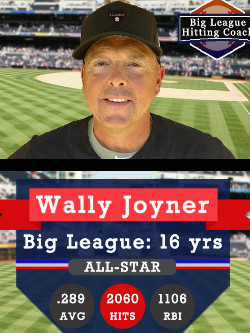 Today’s post is an interview with Wally Joyner, current Hitting coach for the Detroit Tigers.

Wally “Wally World” Joyner played for four Big League teams during a 16-year career, most notably for the Angels, for whom he was an All-Star during his 1986 Rookie season. He finished second to Jose Canseco in the Rookie of the Year voting. Wally was a member of the pennant-winning 1998 Padres.

Wally began his pro coaching career in 2007 and has since been the hitting coach for the Padres, Phillies and Tigers. He is currently the Tigers hitting coach on a star-studded staff.