The first baseman is not the cut-off man in as many relay situations as the shortstop and second baseman. As the first baseman, you need to know when you should expect to cover the vacated second base bag, when to be in place for a relay, and when to back up a double cut. You may want to read about the basics of relays and cut-offs before proceeding with the specific scenarios on this page.  Also, click here if you are wondering “What are the numbers for baseball positions?” 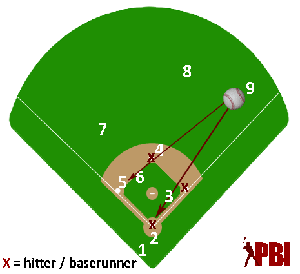 The first baseman is the cut-off man for plays at the plate from right field. When a ball is hit to the right fielder, run toward the catcher and get into position as quick as possible.
You want to be in a direct line from the outfielder to the catcher.

Be about 40 feet in front of the catcher and put your hands up. From this position you can see everything in front of you, so if you need to cut the ball and make a play at 2nd or 3rd, you can. It is easier to have to go toward the baseball then to retreat, that is why this starting spot may seem a little close to the catcher.

Important Note: If a play is developing at home plate and you cut the ball, you will have no shot at the runner coming home. Only cut if you have no play at home or you are going to make a play at another bag. 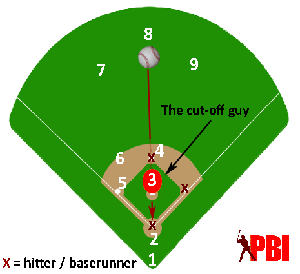 All the same applies from right field as it does center except where you position yourself. You want to be on the second base side of the pitchers mound. This will ensure that the mound will not get in your way on a short hop or if you cut the ball and make a throw. Be right at the base of the mound and let the situation dictate what your next move is.

The biggest reason I don’t entirely like this method is that when the ball is hit to center field, as the third baseman tries to get in the cut off position the runner coming around 2nd will tend to get in the way of your path. This will prevent you from getting to your spot on time. 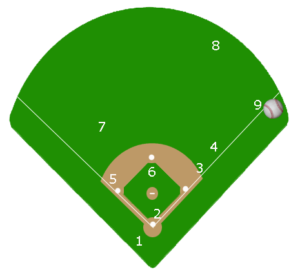 If you are the trail man in a double cut situationon a ball down the right field line, give the lead guy some room. Some teams do it differently, but a good rule of thumb is to stay 20 – 30 feet behind him.

It is your responsibility to make sure he is properly lined up to whichever base the throw is going to go. Talk to him and be his eyes, but remember not to be too close.
You need to get all the throws he can’t get to – high throw or low throw. Be ready in case the lead cut off man lets it go and you have to make a throw.

On a ball that is an automatic double (gets past the outfielder), both of the middle infielders will be going out for a double cut and you will be covering 2nd base.

Anytime both middle infielders vacate the second base on a double cut, you should follow the runner to second base. Don’t beat the runner there, just be ready to make the out if he takes a big turn around the baseline and then tries to come back to 2nd.

The exception to this rule is an automatic double down the right field line. If this happens, and the play is at home (meaning there was a runner on 1st when the double was hit), then you will be the trail man in a double cut to home. If there was no runner on 1st, then the play is at 3rd base and you may or may not be the trail guy for the double cut to third. Teams differ on their preference for this scenario, so you’ll either be the trail guy or you’re expected to cover 2nd.

How to Cover 2nd Base

Again, don’t beat the runner to 2nd base, just follow him and watch for a throw.

<– See all 1st Base Instruction Articles