First base tips – How to make the throw to 2nd when starting a double play. 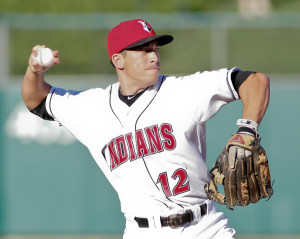 If you are expecting a double play, you need get back to the bag after you make the throw.

The pitcher will try to get there but it is a difficult play for the shortstop to hit the pitcher on the run and for him to catch the ball and find the bag. If at all possible, get back to the bag to take the throw from the shortstop.

If you are throwing to 2nd, then you likely are either (1) positioned to hold the runner on 1st, or (2) playing behind the runner.  Your approach should vary based on the game situation and what you are trying to accomplish.

Situation 1: When Holding A Runner On First Base

There are two different ways to make a throw to 2nd when holding a runner on at first base.

Making the Throw to Second Base…

As a Left Handed 1st Baseman.

The throw to 2nd is a little easier for a left-handed 1st baseman. Whether its hit to his backhand, forehand, or right at him, he just needs to field the ball, take a step or two inside the baseline (towards the catcher), and make a throw.

This move of clearing yourself from the baseline and the runner is so you have a clear throwing lane to 2nd base and your shortstop can catch the ball with no interference from the baserunner.

As a Right Handed 1st Baseman.

The setup for this throw can vary a little bit, according to your personal preference. I recommend that you work ahead-of-time to decide which of these two approaches makes you feel most comfortable and allows you to get your body in a quality position.

Situation 2: When Playing Behind the Runner.

The depth at which you would play behind a baserunner on 1st base varies based on two factors:

All of the techniques and throws to 2nd are the same whether you are holding the runner on or playing behind. The only difference is that when you field the ball behind the runner, you don’t need to clear yourself to create a throwing lane. The lane is already there because of your pre-pitch positioning.