Doug Bernier discusses common two strike hitting approaches, and how to develop the 2 strike approach that works best for you.

There has been a lot made of two strike hitting over the last 10 years or so. Strikeouts have been climbing for hitters which is a result of trying to drive the ball for extra bases.

Many hitters that have potential to hit the ball out of the park would rather take a chance to drive the ball and strikeout on a good swing than choke up and take a good pitch and hit a ground ball to the second baseman.

I understand not wanting to completely change who you are as a hitter, but i also believe we can cut our swing down, make more consistent contact and still drive the baseball.

So much has changed with the two strike hitting and it differs with every hitter. But just remember a pitcher would rather pitch to a free swinging hitter with homerun potential rather than a pesky line drive hitter that doesn’t strike out much, in big situations. 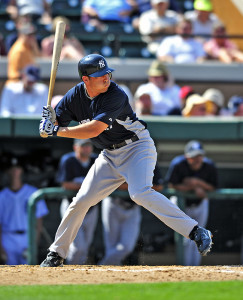 After a baseball season is over with and you look at hitters offensive numbers, its hard not to look at the strike outs and think what could have been. If a hitter struck out 150 times during a season, but was able to put 50 of those in play, he may have been able to squeak out 5 more hits, maybe more.  If you add 5 extra hits into 500 at bats, your average goes up 10 points.  That is a big difference, it goes up even more if you don’t have that many at bats.

Baseball is a numbers game and anytime you can increase your offensive numbers a little will help you down the road.

Effective two strike hitters use a physical or mental adjustment at the plate, or a combination of the two.

There are 3 common physical adjustments that can be used at the plate when hitting with 2 strikes.

Note: Choking up on the bat will make the bat easier to handle but you will lose a little whip that can create a little more pop off the bat.

2. Spread out your stance.

3. Moving closer to the plate.

A few negatives to moving closer to the plate.

CAUTION – Just pick one.  You can pick any of these or use one of your own that works best for you to help with a 2 strike approach.  If you have more than one mental adjustment, your body will not react to either of them properly because it will be trying to do both, and it is proven that too much information can be problematic.

CAUTION – What NOT to change. It is important to not change your baseball swing with two strikes.  You work on your swing in the cage, in practice and every time you swing the bat.  Change your set up and approach, but not your swing.  Your swing is your swing, and if it differs with 2 strikes you are making the art of hitting even more difficult.

Practice your two strike physical changes, if you plan on using them in the game. If you normally stand upright and have your bottom hand on the knob of the bat and with 2 strikes you spread out your stance and choke up, you will feel uncomfortable and will only be hurting yourself. Don’t play with something you don’t practice.

I hope you find this article on two strike hitting to be helpful.  If so, I hope you’ll share it with your friends and help us spread the word about PBI’s great free resources.  If you have questions or additional thoughts, I invite you to comment below.  Play hard!  – Doug