Every baseball player needs to know baseball pop fly priorities, i.e. chain of command, so players won’t be fighting over who should catch a fly ball.

A well-played pop-up is often an easy out – but DON’T take that for granted.

A poorly played pop fly is not only embarrassing for the players, it can lead to errors, runs for the other team, and even dangerous collisions.

So here it is.

***Pop fly priorities broken down for the whole field*** 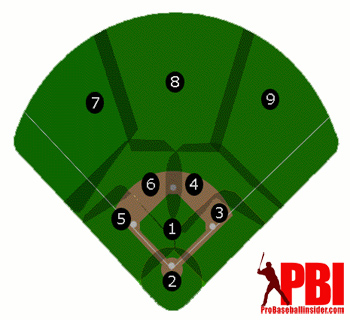 Who should catch a pop fly?

A side note: Your coverage zone may be more or less than shown on this diagram, because a player’s range differs according to his individual athletic abilities and pre-pitch positioning. 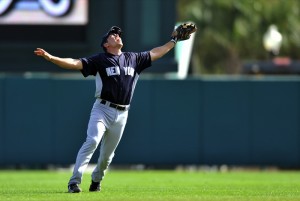 NY Yankee Doug Bernier calls off the other fielders before making the catch. Image by Ed Wolfstein.

Wave your hands.  As an infielder if you are going back on the baseball and you are calling the baseball, along with yelling, wave your hands in the air so the outfielder can see that you are calling it. When there are a lot of people yelling and the infielder is yelling back towards the catcher, often times the outfielder won’t hear anything, but he will see the infielder waving his hands.


–Example 2: Trip to the Hospital Avoided

Red Sox left fielder, Jacoby Ellsbury, and third baseman, Adrian Beltre, both ran hard after a pop fly. Ellsbury slid just before collision, following proper pop-fly priority protocol for outfielders, and effectively avoided a head-on collision. His quick response likely saved him a concussion and trip to the hospital, if Johnny Damon’s experience is any indication.  Click here to watch the video.

I hope this article on baseball pop fly priorities and how to avoid injury helps you play smarter, safer, and more effectively.  I invite you to ask questions or leave feedback in the comments section below.   Play hard! – Doug