Each fielder’s role and positioning on double cuts and relay plays.  Includes diagrams for baseball positioning in various situations.

If you haven’t already, you may want to read about the basics of cut-offs and relays before proceeding with this article on positioning for double cuts. 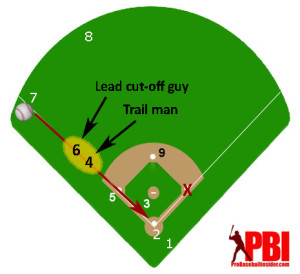 What is a Double Cut?

Double cuts in baseball are needed when a ball is hit to the wall and there is going to be a long throw to a base.  A double cut is when two infielders go out to cut the ball and relay (throw) the ball to a base. One infielder will be the primary cut off man, or the lead cut off man. The other infielder will be behind him in line with the target about 20 to 30 feet and will be the relief valve and get the throws that the lead guy can’t handle. This section will show you the ins and outs of where to position yourself.

Diagrams 3: Runner on 1st base

When a double is hit (i.e. the ball gets past the outfielder) and there is a runner on first base, then the throw will be to home plate. As always,there is the potential for a cut-off and throw to 3rd base.

If there is a runner on 1st and a ball is hit down the left field line, then the throw is lined up to home plate. 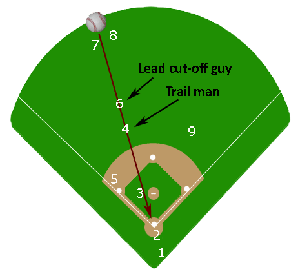 Positioning – The shortstop is the lead cut-off guy and the second baseman is the trail man.

Stay in fair territory, and line up about halfway between the leftfielder and the catcher. Depth fully depends on the leftfield arm strength.

If the  ball in hit through the left center gap – runner on 1st – then the shortstop is the lead relay and the second baseman is the trail guy in the double cut lining up to home plate. 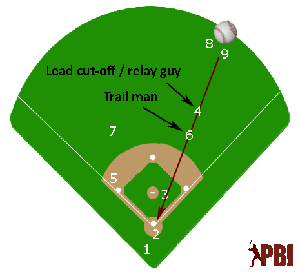 For a double hit through the right center gap, defensive positioning changes up a bit. The second baseman is the lead guy in the double cut lining up to home plate, and the shortstop is his trail guy. 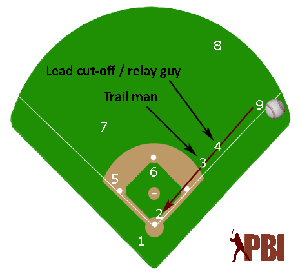 Ball is hit down the right field line. Second baseman is the lead cut off man lining up to home plate. Stay in fair territory, and know your first baseman is behind you in case of a bad throw from the outfielder.

Note to Shortstops: The shortstop hangs out behind the pitchers mound in line with ball and 3rd base. From here you need to be able to get to 2nd if the hitter falls down and there is a potential play at 2nd. The shortstop also needs to see if the rightfielder air mails both cut off men throwing home, he needs to run over and be the emergency cut off man. “The Derek Jeter play.”

Diagrams 4: No one on base

When the batter hits a double to the wall with no runners on, then the relay is lined up to 3rd Base. 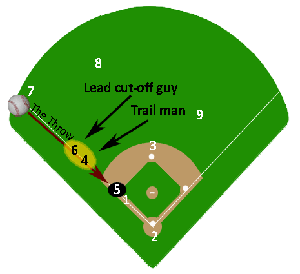 This diagram is shows the double cut for a ball hit down the left field line with NO ONE on base. The throw will line up to 3rd base, with the shortstop as the lead cut-off man and the 2nd baseman as the trail guy. 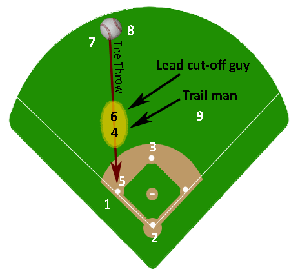 This diagram shows the double cut for a ball that is hit past the outfielders through the left center gap. Since there is no one on, the throw is to 3rd. The short stop is the lead cut-off guy, and the second baseman is the trail man. First baseman covers 2nd base.  The pitcher backs up at third base.

For balls hit in the right center gap, the second baseman is the lead guy in the doublecut  and the short stop is the trailing cut-off guy.

Again, with no baserunner, the play is at third base. 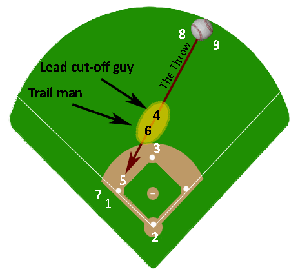 The 1st baseman covers 2nd.  The pitcher and left fielder back up the third baseman, in case the throw is off or he misses it.

This diagram illustrates positioning for when the hitter gets a ball down the right field line.

The short stop will be covering second base, and the left fielder should back up the throw behind third base. 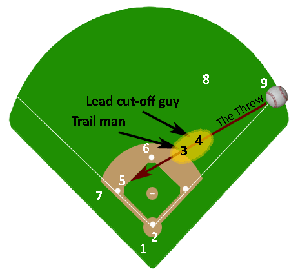