Infielders need to recognize situations for baseball relays and cutoffs, be quick to get into position, and know how to make the relay throw.

This article discusses the best position possible for taking a throw from an outfielder as a cut off man – where to align yourself, and how to make the relay throw as quickly and accurately as possible.

(These tips apply to double cuts as well). 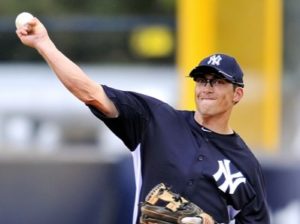 What is a Double Cut? When is it needed?  A double cut is a type of baseball relay.   Anytime a hitter hits an automatic double (a batted ball gets past the outfielder) protocol is to line up for the relay using two infielders – a lead and a trail guy.

Of the two infielders in position, the lead cut-off man is expecting to make the throw. The trail man standing 20 – 30 feet behind him, is ready to give direction and to act as backup in case the ball is overthrown.

Doug Bernier relays a throw from the left fielder Kevin Melillo to home plate. This is an example of a double cut relay, where the shortstop is the lead cut-off man and the second baseman is backing him up.

The rule is to line up the throw 3 bases in front of where the runner starts. The double was automatic, but now you have to keep the hitter from turning his extra base into extra bases.

Don’t worry about runners at 2nd or 3rd base because they are scoring easily on a double.

Note: The hardest part of this play can be the trail man’s job, because he has to anticipate whether the play will be at second or third (or third or home).

For example, a baseball hit left of center field may require the second baseman to receive the throw at second base, or it might require him to vacate second base so he can act as the trail guy in the double cut. The instant he knows there will be no play at second, he must make his move. Sometimes this a difficult read to make when there are only split seconds to make a decision and get into position.

Hitting too many pop flies?  Too many weak ground balls?  Is your timing off?  This book of batting tee drills comes with a Personal Drill Helper chart, which recommends drills based on specific problems or goals for your swing, plus includes free video for each drill to ensure proper technique.

Setup for a Double Cut

As the lead cut off man in a double cut, you are expecting to be the relay guy. 80% of the time, you will be the one intercepting the baseball and making the throw. However, if the throw from the outfielder is going to take a short hop or is high, let the ball go and the second baseman who is about 25-30 feet directly behind you will take the ball. That will be an easier play for him.

As the trail cut off man in a double cut, stay in line with everyone in the relay but stay about 20 – 30 feet behind the lead guy. Communicate with the lead guy telling him to line up left or right, to hold or throw, and to what base. Trail cut off men need to keep their head on a swivel in order to see the runners and the ball in case the lead guy lets the ball go and you have to complete the relay throw.

More about baseball relays and cutoffs, and other baseball tips: