Get expert instruction for how to execute a double play feed to second base, including the underhand flip, overhand toss, backhand toss, and spin or jump feeds.

Pro Tips for Feeds to Second Base 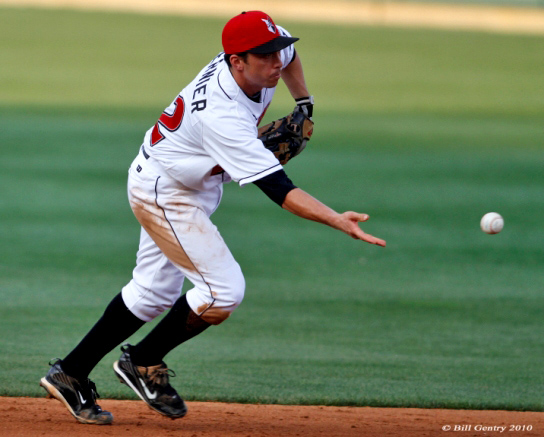 This is the basic underhand flip that the shortstop and the first baseman also use.

This type of feed will be used on a ball hit to your right.

Your shortstop will appreciate this feed because it is easy to see when you are close to him.

How to execute the underhand toss:
Step 1:  After you field the ball, separate the ball from your glove from where you caught it. This is usually a few inches above the ground.

Flipping the ball from where you caught it, reduces the movement that the shortstop sees. If you field the ball and bring it to your chest and then swing your arm and toss it, he is looking at a lot. Make it as easy as possible on him. You will understand when you get a feed from the shortstop where you didn’t feel like you saw it very well. It is tough to be aggressive on the double play turn when you are just trying to find and catch the ball.

Step 2:  With the ball exposed and in clear sight of the shortstop, use your legs to gain ground and momentum toward the second base bag.

Step 3:  With your glove, pull it behind your body at the same time your hand is tossing the ball to second.

The closer you are to 2nd base, the more air you want to put under the ball. When you are a couple feet away, think of it as an ally oop in basketball where you lob it up and the shortstop will go get the ball. If you try to toss it to him when you are too close, there will often be confusion and the shortstop will be on the defensive catching the ball and he may not get the throw off quickly or with a lot of velocity.

This is a very important feed, that many people have a difficult time with, but can make life at 2nd base much easier. This is the feed you will use between an overhand and underhand toss. You are too far to flip underhand and too close to throw overhand. Use this toss on a ground ball hit directly at you to a few steps to your left.

This feed depends on how much you trust it. Players who are really good at this will use this on any ball they can get in front of, some just use it on balls right at them. It is up to you how to use it and how far from second base you can make this toss.

How to execute the backhand toss:

Step 2: Next, just as your underhand flip, separate your hand from your glove.

Step 3: From here really use your left leg to push off of towards the second base bag. The momentum you create will help be the steam behind your toss.

Step 4: With your hand, have your thumb down and your wrist stiff. Just bend your elbow and lock it out when you are releasing the ball to the shortstop. Start the release from hopefully no higher than your knee height, and try to hit him between his chest and face. This will allow the ball to have a slight upward trajectory which is much easier to catch than a ball with a downward trajectory. This play is very quick and easy to see.

The backhand feed does take a lot of practice to be accurate. There is a tendency to miss all over the place, it does take some feel. It is key to use your legs for momentum and power so your upper body can be just the guide for accuracy.

This is a ball that is hit to your left and you are too far to use your backhand toss.

Pro Tips for the 2nd Baseman.

One of the most important factors for the overhand toss is to throw from down to up.  It is much easier for the shortstop to catch the ball that is traveling on a gradual incline to it rather than throw over the top and have it end up at your knees. If you can release the ball between your knee and waist height and the shortstop can catch it between chest and face height, you have made a perfect feed.

Don’t cheat by moving your feet before you have caught and secured the baseball. This is where most errors happen on ground ball double plays. You have heard this a million times but catch the ball first, and then throw the ball.

After you field the ball there are two ways to get the ball to second.

Step 2:  Shift your feet clockwise (right).  You are now facing 2nd base.

The key to this move is to stop all momentum once your feet shift and hit the ground. You need to dig in and hold your position, this can be difficult, your natural tendency is to fall backwards.

Step 3:  Make the throw to second base.

Tilt your head a little to the right, this will allow for an easy ¾ arm angle that doesn’t fight against your body. Some arm angles may differ a little, but this is the standard.

A second method on a ball to your left, after you secure the baseball, instead of shifting your feet around, drop your right foot back a couple inches and take your left knee and take it to the ground.

From this position shift your upper body so you are squared up to second base. Again, tilt your head a little to the right so you can easily get to a ¾ arm angle throw to second base.

Either method puts you in the correct position, it just depends which move you find more comfortable or easier to use.

These are used on a ball hit far to the 2nd baseman’s left – where you can’ get in front of the ball. You are extending and using a forehand to field the ball and your momentum won’t allow you to shift your feet, stop, and throw to second.

Remember, the steps are just to make understanding easier.  Don’t try to chop up the play into these segments.  Keep it flowing one step into the next.

How to execute the Spin Throw

Step 1:  Get to the ball and use your forehand to secure it

Step 2:  Turn your head to your left so you can pick up the second base bag.

Step 3:  Plant your right foot to stop your momentum.

Step 4:  Push off your right foot as you spin to your left.  The spin and delivery to second base should work together in one motion.

How to execute the Jump Throw

The jump feed follows the same sequences except…

Step 3:  Instead of planting your right foot, you take one more half step

Step 4: Launch your jump off your left foot.  Jump and spin to your left (toward the outfield).   The key on this feed is to jump straight up so your momentum can be transferred from going away from second base to straight up in the air. From here you can gather in the air and deliver the ball to 2nd.

I believe the jump throw is more difficult to use than the spin throw, but it just depends on what is more comfortable to you. You can use these moves interchangeably because these are used on the same ground ball.

If you can use all of these feeds, any ground ball you can get to you will be able to toss it to 2nd base for a chance at a double play, and that’s all anyone can ask for.

After diving to glove a ground ball, Bernier flips it to second base to get the runner.