There are two types of feeds that will be used from the shortstop to get the ball to the second baseman to start a double play. They are an underhand flip or an overhand toss. The idea is pretty basic but there are a few ways to make your feeds quicker and easier to handle for the 2nd baseman. 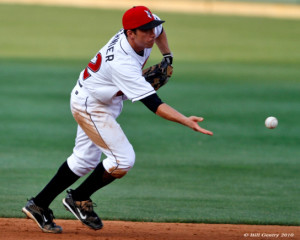 Bernier feeds the ball to second base to get the runner. This is an example of an underhand flip.

Once the ground ball is caught and secured the next step is to give it to the second baseman , who is ready to turn the double play. Here are some keys to think about.

Know your 2nd baseman – Know how your second baseman wants to turn the double play and where he wants the feed to be. Using an underhand flip should allow you to put the ball wherever he wants it to be. It is a very accurate feed when done correctly.

When to use the overhand toss.  This feed is used when the shortstop a little too far for a underhand flip. Ground balls that are hit to your right (from your initial double play depth setup) will need the over hand toss as the ideal feed to the second baseman.

One of the most important factors for the overhand toss is to throw from down to up. It is much easier for your 2ndbaseman to catch the ball that is traveling on a gradual incline to it rather than throw over the top and have it end up at your knees. If you can release the ball between your knee and waist height and the second baseman can catch it between chest and face height, you have made a perfect feed.

NOTE:  Don’t throw the ball too hard. The receiver doesn’t want to be on the defensive catching the ball, he wants the catch to just happen while he is completing the double play. You do your job and let him do his job. Just get the ball to him and let him complete the play.

I hope this article on double play feeds for shortstop is helpful, and I invite you to leave feedback or ask questions in the comments section below.  Play hard.  – Doug