Shortstop and 2nd baseman: How to receive a throw and make the tag on an attempted stolen base.

Many times the difference between an out and safe call is milliseconds. Written for shortstops and second basemen, this article discusses how to get into position and make the tag as quickly as possible, so you can have a better chance to get an out.

The wrong way.   On a stolen base attempt we have a tendency from our position to turn our shoulders and run to second base.

This is not the way to cover the bag. If the hitter puts the ball in play and he hits it to you, your shoulders are turned and your momentum is going towards second base. You are in a terrible fielding position and your range of fielding will be extremely limited.

The right way.  The way to get to the second base bag is to keep your shoulders facing the hitter, take a few steps in towards the hitter (this cuts down your distance to the bag) and shuffle towards second.

Once the ball goes through the hitting zone, be non committed either way so you can get to the bag before the runner or you can break the other direction on a ball hit on the ground.

Once the ball is not put in play, get to the bag as quickly as possible, and straddle the bag so your feet are in a straight line through the catcher. Straddling the bag is important because you want the ball to travel as long as possible. It is faster than going to get the ball and bringing it back to make the tag.

From this position of having the bag in between your feet all you need to do is catch the ball and bring it straight down to the front of the bag. This is where the runner will be sliding. Don’t take your tag to the runner, let him slide into you. If you do an experienced base runner can swim around your tag and get in safely. 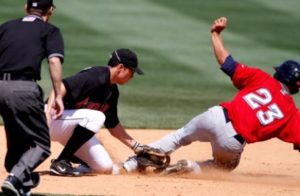 Many infielders want to place both feet in front of the bag, catch the ball, and apply the tag. This position clears you from the runner, and is most natural at first. This, however, creates a long tag and takes a fraction of a second longer to make the play. The ball traveling in the air is faster than your tag, so let it travel as long as possible.

Offline to the right – If a throw is off and to your right, all you can do is catch it (first priority) and bring the tag back to the bag.

Offline to the left – If it is to your left, you need to keep the ball from getting past you so the runner can’t move up to third base. If you can, from the straddle position and you can see the throw is into the runner, take your left foot and bring it into your right foot so both feet are on the inside of second base. From here go up the base line and try to knock the ball down. Getting to the inside part of the bag is important so you don’t get tangled up in the runner.

If the throw is really far to your left – you may need more space or time that getting in front of the bag won’t help you with. Your last resort is to stay behind the bag and take a deep angle away from the runner so you have as much time as possible to get to the throw. This can be a more difficult play because the runner will block your sight of the ball sometimes and the ball can ricochet off of him, which makes catching the ball tough. This is the last resort, and hopefully you can keep the ball in the infield so the runner stays at second base.

Read more about second base strategy