The third baseman plays a key role in defending against sacrifice bunts.

Sacrifice bunt is laid down.  Do you know how to balance base runners with fielding a bunt play?

Sacrifice bunt, Runner at 1st and 2nd base

With runners at 1st and 2nd in a sacrifice bunt situation, your responsibility gets a little more complicated.  THE RUNNER KNOWS THAT.  So you should be familiar with what to do in this scenario, because the hitter will be trying to lay the bunt down in your direction. 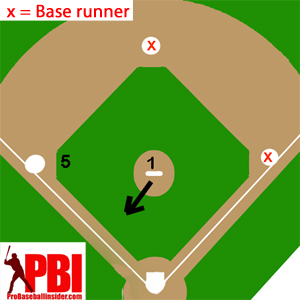 Runners on 1st and 2nd

In a bunting situation start where the infield grass meets with the dirt and take a step or two towards the hitter. Position yourself about 10 feet from the foul line.

Pro Tip:  Being closer to the foul line makes it easier to field a bunt because everything will be either at you or to your left, and your angle to the baseball will make your throw to first easier. It is much more difficult to field a bunt with your momentum going to your right and having to throw across your body to first base.

If the ball is bunted toward third base where there is some uncertainty of who should get the ball between you and the pitcher, call him off. When in doubt, go get the ball and get the out at 1st base.

This can be a tough play for a third baseman, just remember even though you want to get the lead out, it is much better to get an out at first base and have the runners move up, than not to get an out at all. Communicate with your pitchers and know which of them are better at getting off the mound and fielding bunts than others.

The one rule to remember above all else, when in doubt call the ball and get an out at first base.

Sacrifice Bunt, Runner at 1st base

The hitter is most likely trying to bunt up the 1st base line. Of course, it won’t always go as planned, so be ready. If the hitter is a lefty, chances increase for the ball to be coming your way.

Important:  If the bunt comes your way, the third baseman (you) will charge the ball.   This is because you won’t have the responsibility of getting back to cover the third base bag right away. 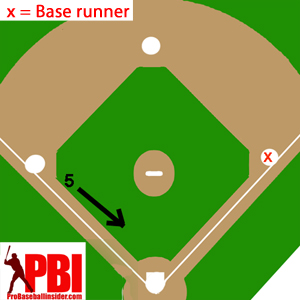 Runner on 1st base. The 3rd baseman charges when a sacrifice bunt is hit down the 3rd base line.

In a situation where you know or suspect a sacrifice bunt, start on the infield grass. If you are really sure, you can always take a couple steps toward the hitter so you are around 80-85 feet away from home plate.

Once the hitter squares around to bunt, charge in hard, but always stay aware that if you get to close he could pull his bat back and swing.

Since the first baseman has to hold the runner on at 1st base, he will be getting a later jump towards the hitter. This is why the batter should be trying to bunt the ball up the first base line.

If he gets the bunt down and someone other than you fields the ball, start making your way back to the 3rd base bag so the runner won’t move up to third base.

If the batter does bunt the ball down the 3rd base line, know that you may have a play at 2nd base with the shortstop covering. That potentially could turn into a double play.

A bunt placed down the 3rd base line and there is no play at 2nd, make sure of the out at 1st base. Then, either the 3rd baseman or the catcher needs to cover 3rd base, so the runner stays put at 2nd.

Questions about proper third base bunt positioning?  We’re happy to hear your comments below…

What to Read Next: More Free Instruction for Third Basemen