Few things can give your team a momentum boost quite like a double play. Double play feeds by the third baseman can make or break the team’s shot at getting the two quick outs. 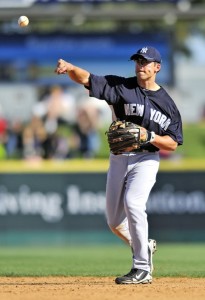 As the third baseman, your feed to 2nd base on a double play depends on where your 2nd baseman likes to receive the ball. Some like it behind the bag, some like it directly over the 2nd base bag.

Most likely, your 2nd baseman wants to receive the ball at chest level and behind the bag  (from the 3rd baseman’s perspective, to the left side of the 2nd base bag). This gives the 2nd baseman enough space to successfully complete the double play and not get taken out by the runner.

Make sure you get the ball to the second baseman as quick as possible. The less time he has to worry about what the base runner is going to do, the better.

The toughest throw to handle is the one up the line into the runner sliding into the bag. Especially if the runner is fast or it takes a while for the play to develop.

The second baseman should be able to handle any throw, but it is nearly impossible if the runner gets to him at the same time he catches the ball. So giving a good throw behind the bag will give your 2nd baseman more time.