It’s time for some hard truth and honest self-evaluation.   It’s something we all need to get good at if we want to succeed in this game of baseball.

We each need to ask ourselves…

“What sort of effect am I having on my team?”

During Spring training with the Yankees I got to be on the field with Derek Jeter every day, and there was something I noticed about him… 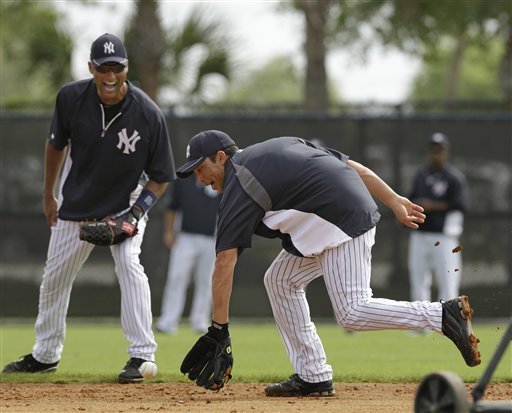 During every single practice, he went to work.

He took extra swings in the batting cage.   He ran hard in conditioning drills.

He ALWAYS ran balls out to first base – and even on ground balls to second baseman he gave a good effort.

And do you what result was?

Every player on that field was left thinking,  “Wow, if Derek Jeter runs hard, I know that I better run hard too. ”

The Truth about Baseball Leadership

Whether we like it or not, there is always a hierarchy of players in any team sport.

I have experienced both sides of the baseball hierarchy of command. In high school and College I was a team captain, but when I first stepped foot onto a professional baseball field, suddenly I was the low one on the totem pole.

It wasn’t until then… starting from the ground up, that all this really sank in.

I’ve witnessed the opposite as well, and it destroyed the team.

When the team captains started showing up a little later to the field, or they didn’t run hard around the bases, or they started missing extra batting practice sessions. The rest of our team followed their example.

Professional sports are filled with extremely talented athletes. The margin between winning and losing is often so small. Once our team started to cut corners and not put in the effort, the losses start to pile up and it becomes a very difficult hole to climb out of.

So what’s the bottom line?  We have to LEAD BY EXAMPLE.

There is a trickle down effect – and not just in baseball leadership.  If a team captain gives minimal effort the rest of the team will follow.

This is sometimes a hard concept to grasp for young athletes who are naturally gifted and don’t need to put in the effort other players do to excel.

No amount of “inspirational pep talks” before a game will pull a team to greatness when every other day during practice the best players show minimal effort and lack of enthusiasm.

If you are a captain or leader on any team, don’t take for granted the impact and influence you have.

Look around at the great teams, not only in professional baseball but in all leagues. The teams usually reflect their leader and the best teams have leaders that work hard and lead by example.

Do the same and watch how the team will follow your lead becoming a stronger more cohesive unit.

I hope this truth about baseball leadership strikes a chord with you like it did me.

PS.  On a separate note, I’m happy to announce that one of my favorite bat companies has just done a MAJORLY awesome thing for you guys – they created a top secret discount code that is exclusively just for us.  Now you can get 15% off the same wood bats I (as well as Carlos Gonzalez and about 50 other big leagers) use in games… birch bats from B45.   Click Here to see the secret code.