Have you ever wondered “Am I good enough to play baseball in the Major Leagues? Will I get noticed by pro baseball scouts?”

You’ve probably heard the phrase, “He’s a 5 tool player” or “He has great tools.” Have you ever wondered how your tools stack up against the competition?

Orioles scout Jim Thrift discusses the 5 tools of baseball, including his evaluation process and some hard numbers for what baseball scouts look for.

Yes, we’ve said it before… Knowing what you are good at and then maximizing those talents is how you make it to the highest levels of baseball.  What kind of player are you?  What are you exceptional at?  And perhaps more importantly, what are NOT exceptional at? 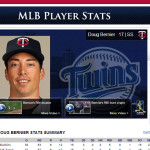 PBI founder Doug Bernier may not ever have made it to the Major Leagues had he not applied this process to himself.  Doug was offered several college scholarships as a pitcher.  However, an honest evaluation of his abilities told him that he just wasn’t exceptional enough as pitcher to make it where he wanted to be – the Major Leagues.  So what did he do?  Reinvented himself as a shortstop and defensive specialist, and took the one scholarship offered to him by a school that was willing to give him the job of shortstop.  Now Doug is a utility infielder for the Minnesota Twins.

Who needs to have plus ++ score for arm strength?  Nobody.  Arm strength is a tool that gets noticed by scouts and can make the game easier but, if your arm isn’t as strong as you would like, don’t get discouraged.  Baseball is a game that you can still play at the highest level.  It does mean that you need to be above average in one or more of the other 5 tools of baseball. 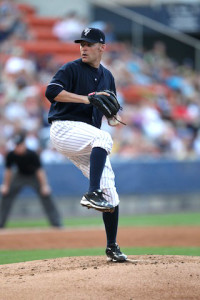 Pitchers.  A pitcher’s arm is judged on two aspects

Unless a coach is unusually good making infield/outfield practice game-like, it is only in game situations that you get a true glimpse into the power of a player’s arm.

When an outfielder makes that throw home, or an infielder is in the hole and must make a strong throw to 1st base…  these scenarios are the most telling about whether arm strength is scored in the plus column.

A possible exception is long toss.  It’s not quite the same as a level, accurate, powerful throw from deep in the hole, but long toss can be an opportunity to show off a power arm. (Long toss is also a very important way to develop arm strength that doesn’t put too much pressure and risk of injury on your arm).

Pro Tip – “Infielders, if you place a target at first base, you should be making 10 out of 10 throws accurately.  If not, this is something you need to work on.” – Doug Bernier, PBI founder and infielder for the Minnesota Twins

Did you miss it? Part 1 – How scouts evaluate the 5 tools of baseball: Running Speed

[box]Says Who?  Orioles Scout Jim Thrift.  Jim’s 28 year career in baseball includes 4 years scouting for the Baltimore Orioles in the amateur, pro and international divisions, 15 years with the Cincinatti Reds as a Major League scout, amateur scout and National Cross Checker, triple A hitting coach, and a long list of other impressive experience in professional baseball.[/box]

What to read next?

More FREE tips and instruction from the pros