When there are many baseball players with a similar talent level, there are things you can do to give yourself an edge and stand out from the competition.

How many times in your baseball life have you heard “run every ball out” or “run hard”?  Well that doesn’t change when you make it to the pros.

Running hard to first or when running bases is a more important baseball tip than you might think. Let me explain why…

Here are 3 things that coaches, scouts, and teammates can tell about you by whether or not you run hard.

1. It shows you take pride in your work.   Giving effort and running hard is just a sneak peak into a players personality and the pride they have in themselves when it comes to playing the game of baseball. I know you can’t tell everything from effort levels but it does say that the player gives you everything he has and that is important.

Just remember – It doesn’t take talent to run hard, so it looks extra bad when you don’t do it – because there’s no excuse.<

2. It shows you are a team player.  When a baserunner goes in hard to second base to try to beat a throw or break up a double play, it shows that the player is unselfish and a team player. 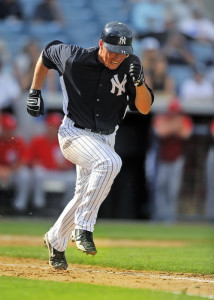 3. Running hard shows that the player is teachable.  Coaches like a confident player, but there are times they may see things that can help your play.

If a player plays the game the right way most of the time, it shows he wants to be the best player possible.  In my experience guys that play hard and give the most effort are the same guys that will listen to people who have more experience than they do.

Scouts and coaches know it’s these guys who become the better players in the end.  Learning and applying is very important if you want to be the best.

A player that runs hard and gives effort will get the opportunity to get the most out of his ability compared to someone that dogs it.  I know its not easy to sprint to first base when you hit a ground ball back to the pitcher.

If you remember one baseball tip from this post – Just remember that you never know who is watching and that could be the only impression you leave on someone.

Bonus tip.  Sometimes when you think you are just going through the motions and running out a ball that is a guaranteed out, crazy stuff can happen.  Someone makes an error, gets confused, or forgets to tag the base… if you run it out, then you can take advantage of these inevitable situations.  This can help your own stats as well as the teams.