It can be difficult to sort good information from bad information when it comes to baseball instruction.  That is the battle everyone faces.  But i have a few markers that may make it easier to sort through all of the information that is out there.

I was recently asked about how to know good from bad baseball instruction.  I thought it was a good question and decided to share my thoughts on the issue.

1. Level of experience.  First, I believe that it helps if someone has experienced professional level baseball.  I believe this is the purest form of baseball, since competition is too good for trickery and gimmicky plays to work (unlike high school and college baseball).  This means that solid fundamentals matter more than ever.

Since the competition is so evenly matched, MOST players need more than just athleticism to separate themselves from the pack (of course there are some exceptions) – they also need knowledge.

To succeed at the professional level, players have studied the game for years and become experts in both the physical mechanics of hitting, throwing, fielding, etc. and by learning how to play the game  mentally.

Just like in the highest level of any sport, when the players are so much better, the little things count so much more.

Furthermore, when a player has played professionally, they have had access to other coaches and players who have also attained that high level – this means they have more opportunities to learn from the best and continue perfecting their craft.

And here’s one more thing to consider… There is an idea in psychology that says it takes 10,000 hours of working at something to become an expert.  That’s about 3.5 years of FULL TIME work.

Since most people do baseball at, let’s say, 2-3 hours a day for 5-6 days a week all year round (being generous), we’re talking decades to become an expert.  I ‘ve been playing baseball for 2 and half decades now, about half of that professionally, and I feel like I’m STILL learning new stuff all the time.

But my point is, professional baseball players are the ones who have those kinds of hours under their belt.

Second, I believe that some of your best players are NOT the best coaches.

Some players were just born to be all star’s.  They separate themselves on pure talent and often times don’t need to learn the things that most players need to learn.  They haven’t spent the time really studying the game.

If you look at some of the best big league managers, most were not the best players in their era, but they grinded and they really watched and studied the game.

3. Catchers.  Catchers need to know almost every facet of baseball (pitching, hitting, strategy, etc.) since they are in the middle of every play. From their defensive position they can see all, and they are constantly learning.  For this reason many catchers can make really good managers and coaches. 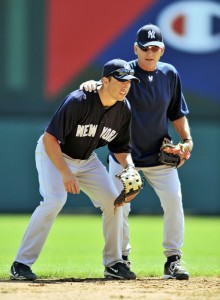 4. Flexibility and Insightfulness.  Baseball is a unique game where there is not always one way to do something.  I believe that it is important for a coach to be flexible in certain areas that are unique to the player but also have enough knowledge to identify the things every good player must do.

For example my little league coach would always tell me and others to keep my back elbow up.

There is no reason.

It is more important to understand how you are getting to the contact point and what every player does at contact, rather than if your elbow is up or down before the ball is even pitched.

It may be of some concern if a coach is trying to mold all hitters, pitchers, etc. to all do things the same way.

Everyone is a little different and some of your best coaches work with each player to use what they do best and make that work, rather than molding them into the only way the coach knows.

Looking for free baseball tips and instruction from the pros?

Sign up for the free videos – 5 Point Power Booster – https://probaseballinsider.com/register-5-point-power-booster-videos/