Trending
By Doug Bernier on February 17, 2020 base running, base stealing

In this video, Major League base stealing leader Eric Young Jr. shares some of his best base stealing tips and techniques with you.

In 2013, Major League outfielder & 2nd baseman Eric Young Jr. stole 46 bases in 2013 and led the National League in base stealing that year.

Eric is going to share how he was able to do that, and how YOU can use those same tips and tricks for yourself, including..

Plus a bonus question at the end of the video, about how to increase your speed.

Who is Eric Young Jr.?

In 2006, Young led all minor leaguers in stolen bases with 87. He then won the Arizona Fall League batting title, finishing with a .430 average. Young appeared in the 2009 Futures Game, hitting a three-run home run.

Young made his major league debut on August 25, 2009, for the Colorado Rockies playing center field.

He was the National League stolen base champion in 2013. 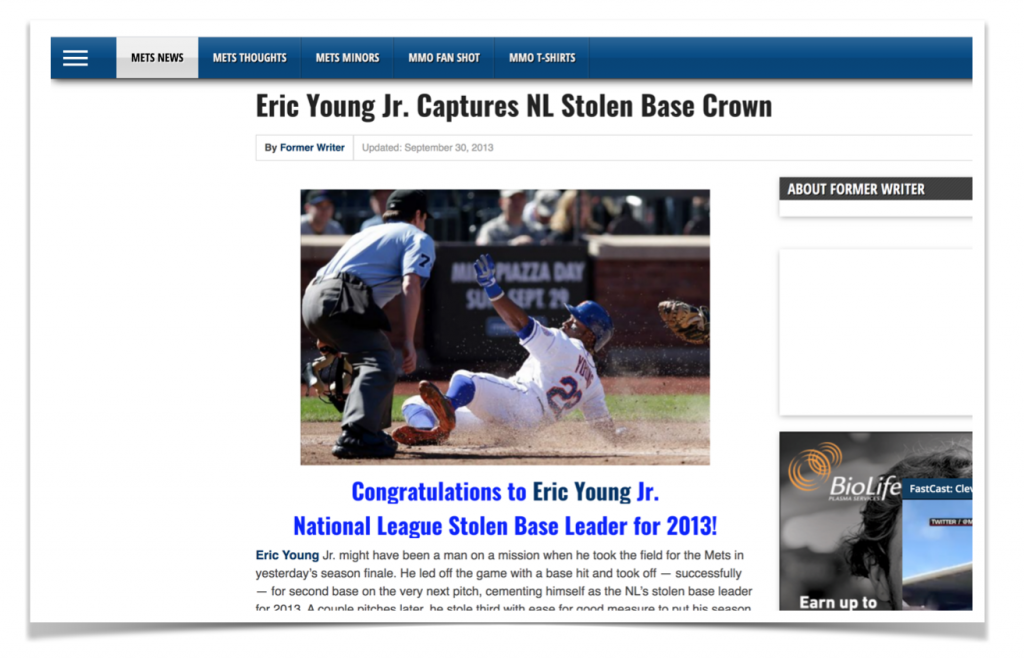 He is the son of former professional baseball player Eric Young, who was also famous for his base stealing (Fun fact – On June 30, 1996, his Dad managed to steal second base, third base, and home plate in one inning in a game against the Los Angeles Dodgers.  The year before, as a CO Rocky, he stole 53 bases.)

Eric Young Jr. played in the Major Leagues for the following teams:

(Watch the video or keep reading)

Base Stealing Tip #1 – Don’t just rely on your speed

Base stealing is not just about speed…  There’s strategy and timing involved, too.  There are many fast players in the MLB who are terrible base stealers.

“When it comes to base stealing, I know it’s not just about speed.  I’ve known many fast players in the MLB who weren’t able to steal bases.” – Doug Bernier, Former MLB player

There are times – if you know what to look for – when an average speed guy can steal a base!

Think about it.  In a big game, a big situation… this is nice tool to have in your back pocket.  But you won’t be able to do it unless you know what to look for.  So keep reading…

Base Stealing Tips – #2 – Steal off the pitcher, not the catcher

Sometimes player’s will ask, “Should I steal even if the catcher has a strong arm?”

Here’s what Eric Young Jr. has to say about that…

“First off, you’re usually always stealing off the pitcher.  Catchers… you know it doesn’t matter if he has a good arm.  If you get a good jump off the pitcher, the catcher’s not going to be able to catch up.”  – Eric Young Jr.

Sometimes players get scared to steal because they know the catcher has a strong arm.

But the truth is, if you can read the pitcher’s tells (more about that in Tip#4) and predict what’s going to happen, you can give yourself enough of a head-start that it won’t matter how strong the catcher’s arm is.

Base Stealing Tips – #3 – Don’t forget about the catcher

Throwing skills aside, sometimes the catcher IS useful for stealing.

Some catchers telegraph what pitch is coming next.  For example, he might set up to receive a breaking ball differently than he sets up for a fastball.  If you can spot a habit like this, you’ll  know when a breaking ball is coming (a lower velocity pitch gives you more time to steal).

Not all catchers do this, but it’s definitely worth watching the catcher for a short while to see if you can pick up on any patterns.

Base Stealing Tips – #4 – Use the pitcher’s rhythm against him

Pitchers (like almost all baseball players) are creatures of habit.  Having a consistent rhythm helps us achieve consistent results, and pitchers are taught this at a very young age.

And that works out great for them… most of the time.

A savvy base runner can tell if the pitcher is going to throw home or try a pickoff BEFORE it actually happens.  According to EY (and I’ve also seen it for myself many times), many pitchers have “a tell.”

For example it could be…

If you can “read” the pitcher, it’s as close as you’ll get to knowing the future.

An early jump can be just the edge you need to steal a LOT more bases.

Base Stealing Tip #5 – How to find the pitcher’s tell?

I can’t give you the magic bullet here.  This is something you have to do for yourself.   But it doesn’t have to be difficult.

Just make it a habit to use your time wisely.

EY called it “Mental Practice with a Purpose”

When you’re in the on-deck circle

…or in the dugout

USE THAT TIME to study the pitchers and watch for their tells (you should be doing this anyways, because you might pick up something that can help when you’re hitting).

Now, did you know there’s actually a magic formula for stealing bases?

Seriously, you plug in 3 numbers and it tells you if you can successfully steal any base, any time.  Click here to check out the base stealing formula.

Hope this helps.  More from Eric Young Jr, and other professional baseball players, coming soon.  If you want to get notified – plus other exclusive freebies – Click Here to Subscribe

Do you plan on stealing any bases this season?

Let me know in the comments below how you plan to make this your best base-stealing year EVER.