Trending
By Doug Bernier on June 28, 2012 base running, base stealing, Low Liners Blog

Juan Pierre is leading all of MLB’s active players in stolen bases at 560. He is also number 21 on the all time stolen base list.   In this post is 3 tips from Juan on how to steal bases.

Juan is known around the league as one of the best and hardest working base runners around.

But though he has been blessed with tremendous speed, Juan will be the first to say that is not enough to be a great baserunner and base stealer. You need to be smart and work on this skill often.

I have the tremendous opportunity to work out with Juan in the off season and pick his brain about baserunning.  He talks about three things that he does when stealing second base.

Aggressive Mindset.  Before we dive into this a little more, the first thing we need before stealing a base is confidence and an aggressive mind set.  It doesn’t matter how much speed you have, if you are not 100% committed to stealing a bag.  If you aren’t fully committed then you will be too conservative and not get the proper jump you need.  Having an aggressive mind set is very important in all aspects of the game but equally important in stealing bases.

These are three tips that Juan Pierre shared with me on stealing second base off a right handed pitcher.

The first thing Pierre knows before he even gets to first base is how fast the pitcher is in the stretch to home plate.  All baserunners should have a particular benchmark that will help you in your decision to go or not go.

You need to know how long it takes you to get to second base from your lead at first.  Once you know that, you can factor that an average game throw from a catcher takes 2.0 seconds (from the time the ball touches his glove to when the middle infielder catcher the baseball).  Take the difference in your speed and 2.0 and you have a time.  For example, I go from my lead at 1st base to 2nd base in 3.3 seconds.  So I subtract 2.0 from 3.30 and that’s my number.  I will look to steal a base if the pitcher is a 1.30 or higher to the plate.

In other words, if Pitcher’s Time + Catcher’s Time = More than your time, then you can look to steal. 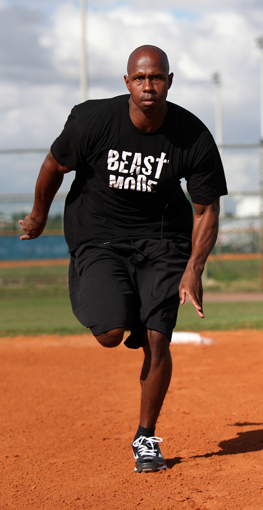 Focus in on a spot on the pitcher that needs to move every time in order for him to throw home.

Some baseball players look at the front shoulder, front knee, or even the whole picture.

Juan likes to look at the pitchers front heel since, clearly, his front foot has to come up to throw home.

The spot of focus is different for everyone, so it’s important to find what is comfortable to you and what you can read quickly to help you get the best jump possible.

Juan stays as low as possible when taking his first few steps. When you start your move you create a certain amount of momentum, and it’s very common for players to lift higher on a first move.  This slows you down.

You want to get as much ground as possible to second base.  When you can take your first few steps and stay low you are using that momentum as efficiently as possible by driving towards second base. When stealing a base, the first two or three steps are most important.  Try to think of getting up to top speed in the least amount of steps.

I hope these tips for how to steal bases will help you as a base runner. You may have heard them before or maybe they are new to you but it’s cool to know that this is the recipe for stealing bases for one of the best base stealers of all time.

(Image 1 courtesy of Craigfnp at the English language Wikipedia. )