Major League pitcher Garrett Richards shares 4 tips for how to throw a slider.

Typically we publish our own original content here on PBI.  However, from time to time we like partner up with friends who share the vision to make awesome baseball instruction available to everyone.  This video is shared courtesy of ProTips4U, where you can purchase similar videos by Garrett Richards and other Major Leaguers.

As we like to say, to be the best, learn from the best!  Hope you enjoy this video,

…and today I’m going to be teaching you how to throw a slider. 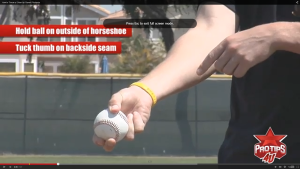 Now my thought process on this pitch is to throw it out in front, and almost let my fingers work over the front side of the baseball. 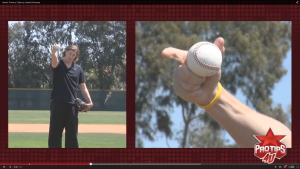 So really feel your fingers work over the front and top side of the baseball.

Now when throwing this pitch, if you have good control over it you can throw it as an 00 pitch an 01 pitch… typically you can throw this pitch at any count. Typically it’s going to be a strike out pitch because it looks like a fast ball and then in the last five feet or so it breaks off the table to make it a slider.

I throw my slider as a strike out pitch or a pitch early in the count if there is a guy who is going to be potentially swinging first pitch or a guy who is just bad on swinging at breaking balls. So for me, this is a huge pitch.

When you set your sights on your slider depending on how much your ball breaks, for me its important to pick out a spot on the catchers body to start the ball at and then have it finish wherever you need it to. It’s called a focal point.

That’s my tip on how to throw a slider and I’ll see you at the ball park.”

Garret Richards is a Major League pitcher with the Los Angeles Angels.   Richards’ MLB debut was in 2011, and as of the publishing of this post, sports a career ERA of 3.63.  In 2014, Richards threw an immaculate inning against the Astros, when he struck out 3 batters in 9 pitches.

Looking for more video tips from the pros like this one?  This video was shared with us courtesy of ProTips4U, where you can buy videos like this one individually or bundled.   (Also, use this code and you’ll get 5% off:   protips4u-BNG-3V90)

This is how we notify you of new, free video or articles we've added to the website. We promise not to spam you or share your info.