When choosing for yourself how to swing a baseball bat, it helps to know the pros and cons of each baseball swing style.  This video (below) is the one of the best I’ve seen to show the differences, and why they matter.

When I first met Bobby Tewksbary, he showed me the 3 different types of hitters from this video – (linear vs rotational hitting, and then the “elite” baseball swing).

I had more of linear swing, and I wasn’t getting the most out of my abilities.

This was 2013.  It was my first season with the Minnesota Twins and I was at a crossroads in my playing career.

I was 33 years old (that’s an old man in baseball years) and for much of my previous 10 professional seasons I swung a wet newspaper.

I simply hit the way I was always taught.

My whole life I was taught to get my foot down, take my hands to the ball and stay inside everything.

That year in spring training is when I met Bobby Tewksbary, and just through our first interaction I started to look at hitting differently.

I never would have made it back to the Major Leagues if my thoughts on hitting hadn’t changed.

In spring training of 2013 I busted out a leg kick for the first time in my career.

This was and can sometimes still be frowned upon by smaller players.  Even though the sequence of my swing was not “elite” yet, I was becoming more athletic and hitting balls with more authority.

For the first time in my career, people started to take notice of my offensive production…

…and it was that same year – 5 years after my Major League debut – I finally made it back to the Major Leagues.

So, what made the difference?

Fast forward to today, I have worked with many hitting coaches and Bobby is a special talent.

He not only has a good eye to see and analyze the swing at real time, but Bobby understands the swing inside and out and is the best I’ve seen at teaching.  He gets that all people learn differently and he is great at saying things different ways so the hitter understands.

The goal of hitting is to get the body in the best position possible so the swing can be effective, efficient, and adjustable at the same time.

With so many people online doing video analysis, my concern is that even though there are many well intentioned people, they don’t understand movement patterns of the swing.

They see small pieces of the swing that are more results from a larger problem and they aren’t fully sure how the entire kinetic chain of the baseball swing actually works.  More or less they are just putting band aids all over the swing instead of just getting to the core of the problem so all other small inefficiencies fix themselves.

Most “expert” video analysis people’s opinion are solely online and they aren’t able to connect the dots between what they are seeing on video and how to apply it in an actual game because they have never been there or they don’t work with the best of the best.

Bobby actually works with Major League hitters throughout many different organizations.  (You may have actually seen him throw to Josh Donaldson at the 2015 all-star game home run derby.  Just a little fun fact. ) 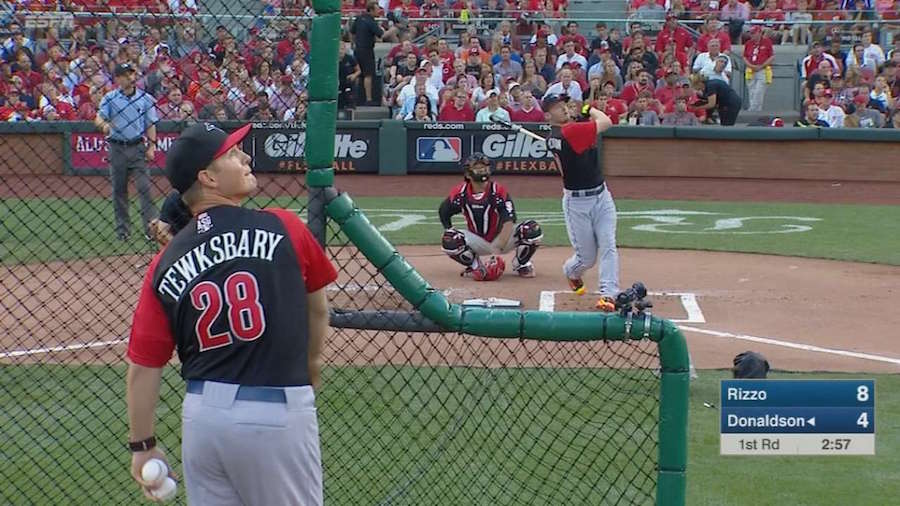 I’ve had the opportunity to hit with Tewks a few times and the only regret I had is that I wasn’t able to instill good habits (instead of unravel 25+ years of bad habits) when I was younger.

In the video above Bobby talks through the 3 types of baseball swings (linear vs rotational hitting vs a 3rd option) by reviewing Jamey Carroll’s swing, Giancarlo Stanton’s swing, and Albert Pujols’s swing.

Even though these hitters are very different, we can still learn from these guys on what a better movement pattern looks like.

The goal is not to turn everyone into home run hitters, because that is not realistic.

He talks about allowing yourself to get the most bat speed and on plane barrel distance through the hitting zone as each individual is capable.  The result should be more hard hit balls, being able to see the ball longer, and being more adjustable in your swing.

To get more hitting instruction from Tewks, check out his Elite Swing Mechanics Book + Instructional Videos.  It’s over 2 hours of video instruction and drills, plus his ebook is awesome.

That link is my affiliate link, so a portion of your purchase supports this website.  It’s free for you, and it helps us keep the 100’s of pages of pro instruction on Pro Baseball Insider free for everyone… so thank you!