Which wood is best for a baseball bat?  Here we compare the pros and cons of each in this head to head comparison of birch vs maple vs ash bats.

Northern white ash is the most common wood bat available. It has a little flex in the bat (similar to some aluminum bats) which is popular because it may have a little extra whip.

When using ash you need to hit with the grains. That means you want the grains of the bat to be facing the pitcher. A good indicator is to take the label on the bat and have it facing straight up in the air, or have it facing the ground. The label is printed on top of the grains so if it is pointed up or down at contact you will be in the optimal position. This has been proven to be the strongest part of the bat for exit ball speed and overall bat durability. 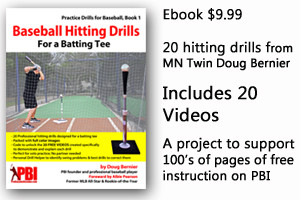 For a pro review of the best wood bats on the market, click here

Maple bats exploded onto the scene about 15 years ago. Maple is a harder, more dense wood than ash. It doesn’t have the same flex as an ash bat, but once you get used to using one, it isn’t really noticeable. Even though its a harder piece of wood, it still breaks pretty easily when contact is made at the end of the bat.

Note about safety: The label on maple bats is stamped with the grains rather than on the top like ash. There was a MLB study done in 2008 because so many maple bats were shattering when breaking, potentially causing serious injury. The results of this study was, when baseballs are hit on top of the maple bats wood grains opposed to with the grains, (like you would with ash) the bat is more durable. So for 2009 maple bats changed the location of their label, (you still want the label pointing up or down at contact). They also include a ink mark that will run depending on the quality of the wood. If the wood does not meet certain specifications it can’t be sold.

Birch bats in my opinion have the best characteristics of maple and ash, put together in one bat. Birch bats have a flex similar to ash but doesn’t flake, which is similar to maple.  In other words, the birch has the durability of maple with the flex of ash.

However a brand new just out of the box birch bat takes some “breaking in”. Birch requires some batting practice to compress the wood and make it harder.

So which type of wood is better for a baseball bat?

I have taken tens of thousands of swings with all 3 types of wood.   Now I have been using these birch bats for a few years and I really like them.

I feel like my birch bats get harder after every use.  I personally break a lot less birch bats.  Not sure why but I would usually average about 12 maples a year where now I break 3-5 birch a year. Most of my breaks are off the end and that is where I feel birch bats are more durable than maple or ash.

SPECIAL NOTE – For the last 7 years of my pro career, before retiring in 2017, I used B45 birch bats.  And I happily recommend them because, unlike some of the bigger companies, they make a pro quality birch wood bats for ALL their customers, whether or not they are actually a professional baseball player.

If you’re not sure which one is right for you, check out our pro review of the best wood bats.