Often it can be difficult to watch players and see what makes one better than another.  Player A may have a stronger arm, hit the baseball further and have a faster 60 yard sprint time than player B.  But that may still not tell you who the better baseball player is.  Player A may have a higher ceiling but if he never achieves his potential and player B gets all he has out of his lower ability level, player B could be the better player.

My next couple blog posts will be series of related topics all geared to separators and how these little pieces of the game help you get a competitive edge on other players of equal talent.  As we all know, in baseball results are really all that matters. These separators will help you get better results and may help players learn how to maximize their natural talent.

This idea for this series on Separators came about when I was working with some very talented young players.  As I was watching them throw bullets across the infield, I noticed many were throwing baseballs over the first baseman‘s head, pulling him off the bag or throwing balls in the dirt.  I know this happens but it was happening too much. They have tremendous arms but it didn’t matter because they were inaccurate.

I also noticed watching cut offs and relays how some of the middle infielders would constantly short hop the third baseman and catcher. They weren’t giving the receiver an easy long hop or throwing it all the way in the air. Short hops are not easy to handle and most of the throws were getting passed the receiver and the runner would score and the hitter would move up an extra base. 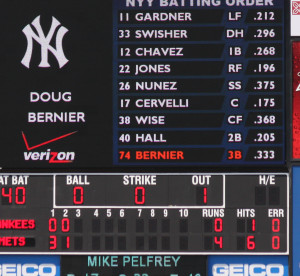 Separators matter more in baseball as the competition gets more intense

As players work up the ranks of high school, college, up through the ranks of the minor leagues, and eventually to the major leagues you will notice little things that give one player an advantage over another.   I call these often overlooked skills “separators” because when used correctly makes you a better baseball player and separate you above your competition.

The higher the level of play, the more you will encounter other players who are already implementing these separators into their game.  As competition gets more intense, these separators become more critical to your success.

Many of these separators go unnoticed by most fans and even some players. The higher your “baseball IQ” is, the more you will realize the importance of these little separators.  It’s important to build these good habits into your game as early as possible.  If you think you can wait until the competition is more intense, it will be too late.

In baseball, little things can give you a huge competitive edge.  The separators I will discuss in upcoming posts are a very important of becoming a more well rounded player.  Why do you think some players are better at age 30 than when they were 20?  Their physical skills were probably better at 20 than 35, but there are things they do now that make them a better player.  I hope to learn and share what these are so players can reach their full potential and get a gain a competitive edge to succeed in baseball.

Keep reading to find out exactly what these separators are, and how they can help you make it to the big leagues.

What’s next: 4 tips for how to improve throwing accuracy: Separators, Part 2