How being baseball savvy helps your team and makes you look good.  Pre pitch planning and knowing where to be before the baseball is put in play is a separator.

Being mentally locked into a game can sometimes be even more demanding than the physical aspect.  During a 3 hour game when you are constantly thinking through situations and you can honestly tell yourself that you were totally focused on every pitch of the game – it tires you out.

Pre-pitch planning is a skill just like hitting and throwing.  The more you work on thinking through situations the less mental fatigue you will encounter and the better you will be at being in the right spots on the baseball field. 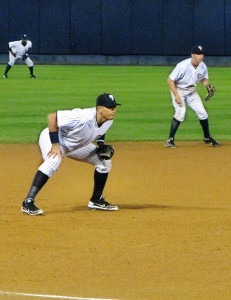 The importance of pre pitch planning – why it matters

When a player knows where he needs to be on the field as soon as a ball is hit, it says a lot to people who are watching and evaluating.  It shows a mental toughness, baseball savvy and awareness, being in control, not overwhelmed, and (I believe) confidence.  Coaches will know they can trust you because you can think on your feet.

Being in the wrong place might go unnoticed for a while, but sooner or later it WILL catch up to you and make you look foolish.

For example, if there is a runner at 2nd base, the second baseman knows that on a base hit to center or right field he needs to cover first base (If you didn’t know that, click here).  If its hit to left he can stay at the second base bag.

Boom, a hit to center field and the throw comes to the cut off man (1st baseman).  If the hitter takes an aggressive turn around first base, the 2nd baseman is there to make a play on him.  In baseball it is very important to keep runners off of second base, it keeps the double play in order and keeps the runner out of scoring position. 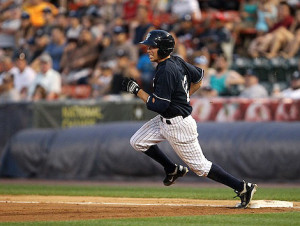 Now if the second baseman wasn’t sure where to go and he hung out at second base (with the shortstop), the hitter can take a huge turn around first (because no one is there) and if the throw goes all the way to the plate he can walk into second base.

Just because the second baseman was out of position, it allowed the runner to move up to the next base.

Baseball is more than a physical sport.  In some ways, it is a 3 hour chess match.  Just one mental lapse can mean the difference between a win and a loss.  The players that think through a situation before it happens are baseball savvy, and will separate themselves from those who aren’t.

Some situations to think through:

1. Backing up bases (pitchers, catchers, outfielders, and infielders)
2. Where to be on cut offs and relays?  Click here to learn where you should be
3. Who is covering second base bag?
4. Will a runner be tagging up?
5. Situations when you are running the bases.

These are just a few. As you pay attention more to situations that come up in a game it will be easier to sift through the information and know where to be.  There should be some thought of where to be on every hitter. This pre pitch planning is second nature to the best baseball players in the world and is one little separator that allows them to play at a high level.