Not only is Juan Pierre a seasoned Major Leaguer, he’s also a base-stealing specialist.  Among his many accomplishments, Juan was the MLB active leader with 614 stolen bases , and currently is 26th all time for base stealing. He also led the national league in steals for 2004 and 2006, and the American League in 2010.

This video is courtesy of ProTips4U, where you can see more videos from Juan and other Major Leaguers.

Transcript (with clarifications) from video above: Tips for Stealing third base

How to steal third base

Actually, stealing third is easier than stealing second. You may find that hard to believe.

It’s because here at 2nd base, you have momentum. You don’t have a guy on the bag like at first base. So for them to pick you off, they have to have a timing play or a timing mechanism.

Pro tip #1:  Take a big lead.  One thing about stealing third, you have to get a bigger lead then you do on second or first base.

Pro tip #2:  MUST have momentum.  You have to get out big. you can’t steal third by standing still.  You can’t be at a stand still and just take off and steal third. You have to have some kind of momentum. 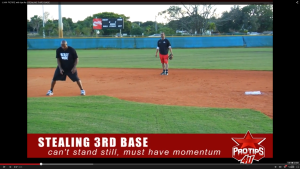 When you are stealing a base, you want to have a direct line to third base.

I don’t like that, because if the pitcher quick pitches then you can’t get back to the line and you can’t steal the base because you are too far back.

I like to get off in a direct line right at the base.

Keep relaxed and moving.  …and remain relaxed and calm. I’m not all ready set like I do at first base. I’m up and just moving about.

Once the pitcher gets in his stretch, you are still moving, keep moving.

Pro tip:  Don’t look back.   You can’t look back and worry about your second baseman and short stop. They’re going to be throwing dirt on you and playing around but your focus has got to be right on the pitcher because they can’t do anything unless the pitcher throws to second.

Rely on your coach.  Let your third base coach tell you where those guys are at. If you hear, “Careful careful!” that means they are getting close.

If he yells, “Back!” then you have to get back.

So that is the only thing you can key in on, your third base coach saying, careful careful or back back. You don’t want to 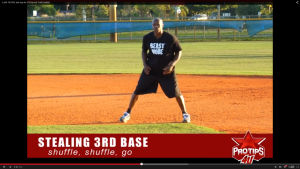 turn back, because if you turn back and look and he [pitcher]goes home then you can’t steal. Or if he picks, then you aren’t even looking at the pitcher to pick.

So you shuffle shuffle and then go.

Know the pitcher’s tendency – one look or two.  A lot of times when I look at the pitcher and I’m on second base, I want to know if he is a one looker or a two looker.

What I mean by that is, when he comes set, if I say that he is a one looker, once he comes set and looks at me once, I know he is going home.

Once his head starts turning like that [looking back to home plate]that’s when I want to start the shuffle shuffle and go.

You have to be subject to the inside move [the wind-up] but if you’ve done your homework, you know he’s a one looker.

A One Look Pitcher

I’m going to have the pitcher demonstrate a one look. He’s going to be a one look guy. So what I’m watching is his head and nothing else. So go ahead.

Wrong way.  You watch his head, he looks at me and as soon as he turns his head you take off and then you go. right there, I didn’t gain any momentum [started running from a set position instead of shuffling into a sprint]. I did what you are not supposed to do. 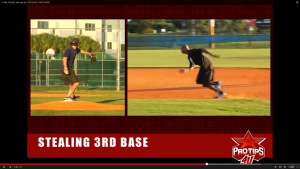 One look vs two look pitcher

We are going to do a one-two look guy and we will end on that.  A two look guy will come set and he looks at you twice.

Keep ready with relaxed movement.  So here is a two look guy (see video). You want to remain calm. You don’t want to get stagnant. You want to keep moving.

Use the second look to time your shuffle shuffle go.  He looks once, turns, you gain a little ground, he’s looking again, step off and then you go. That’s what you call a two looker.  Now those things that you know gain momentum.

Another thing is, you are already in scoring position. So a base hit and you can pretty much score on anything. So when you steal third you have to make sure you are pretty much going to make it. With the shuffle shuffle, gain momentum, and you will be stealing third in no time.  so that’s the tip for today.

If you liked these tips for stealing third base, Juan has several more video tips like this one at ProTips4u.com, including

Protips4U is great because you can just buy the single video or package of videos you want without having to pay a big membership for everything.

And PBI has more free tips from Juan