Trending
You are at:Home»bunting»Best strategy for where to place a sacrifice bunt
By Doug Bernier on October 28, 2015 bunting, Low Liners Blog

“Hey guys, Doug Bernier from Probaseballinsider.com. Today we are going to do something a little different. I like to call it baseball 101. 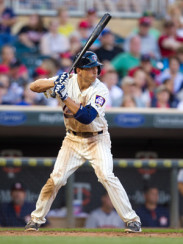 I’m going to be using slide shows and keep everything short and quick. I think it’s a good way to teach. I think it’s a good way to learn. I know I like learning stuff visually and seeing it done really quickly. My attention span isn’t very long, so to me, it helps. So I hope this is a good learning tool and that everyone can get something out of it.

Today, we are going to talk about putting down a sacrifice bunt with a runner at first base.

So picture this, you are in the batters box…

…you take a look at the third base coach and he gives you the sign for the sac bunt.

You want to move the runner up from first to second.

So lets take a quick look at the infield and see how we are going to do this strategically.  If done properly, this play has a VERY HIGH rate of success.

Where NOT to bunt the ball

So first off, we have the first baseman. He is holding on the runner here at first. We have our middle infield at double play depth. We have our third baseman, about a step or two on the infield grass.

So now we can talk about the rotations.

The third baseman has no other responsibility other then charging the ball. So he can come in here as far as he wants, under control, just in case the batter was to pull back and swing the bat. So his responsibility is to come in and get the baseball.

Shortstop is going to move into second base. Second baseman is going to come over here and cover first. The first baseman has to hold his ground until the pitcher starts his motion home. He has to stay at first, just incase the pitcher wants to pick off. Also, if he were to leave too early, this runner can get a bigger lead and potentially steal second pretty easily. So he has to stay here until the pitcher starts his motion home.

So now as we take a look at what the rotation looks like on the field, we can see that the third baseman and the pitcher are in pretty tight. So this is a tight bunt right in that area. You don’t really want to bunt it here, because if we do, the third baseman or the pitcher can just through it to second base and potentially get a double play. 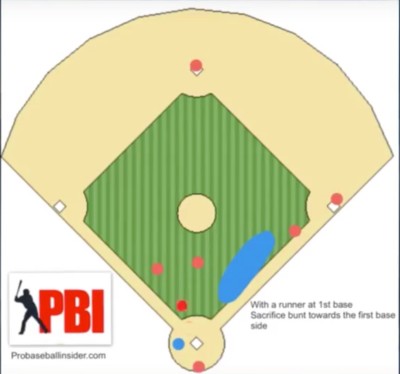 Watch the video above for strategy explanation

Best placement to stump the defense

So as you can see, this is about as far as that first baseman is going to be able to come in when the ball is in the hitting zone to get the ball down.

So you can see here, we have this wide-open area to get the ball down.

So the old adage, with a runner on first base, you want to bunt towards the first base side. You want to make the first baseman field it and he will flip it over to the second baseman, get you out as a sacrifice and we have successfully moved the runner up to second base.

Now this is a very important skill. This skill is helpful, especially late in the game when we need to move a runner up into a scoring position.

I hope this video on sacrifice bunting is helpful and we will see you next time.