Yes, bat speed is important because you’ll hit the ball harder.  But that’s not the only reason.

Better bat speed ALSO gives you more time to make your swing decision… which means you’ll have a better idea where the pitch is going to be located.  And that means you should be able to get a better swing off.

How to Increase Bat Speed

Speaking in general terms, there’s basically only two ways to increase bat speed or power for baseball and softball hitters.

You’ll need to either….

1 – Change your body – With proper strength training to get stronger and faster.

2 – Improve your hitting mechanics – There are probably a dozen different ways your mechanics impact bat speed and power… either for the better or for the worse.  ( Here’s a free video series that covers 5 key swing mechanics to help you see an immediate boost in your power (without lifting weights).

And, of course, the best results will happen when you do BOTH of those things.

There are so many training bats for baseball and softball out there… and many of them are complete gimmicks.  It can be really difficult to cut through the hype and the marketing to see which ones have actual science behind them.

Overload / Underload Training is an excellent way to accomplish that first goal of increasing bat speed and power by getting stronger / faster.

We know it works for 3 reasons:

Below I’ll explain more about those things, and we’ll also cover how to do overload training properly, what kind of results you can expect, common mistakes that stop it from working and what sort of heavy bats and bat weights can be used… and some unexpected benefits that come from using those bats.

What is Overload / Underload Training?

The general idea is to use a carefully-selected combination of either lighter or heavier weighted equipment.

For example… if you were an Olympic javelin thrower, you’d alternate throwing a heavier javelin to increase strength, and then lighter one to increase speed.

For baseball and softball hitters, we use a combination of heavy bat and lighter bat to do the same thing.

And it’s incredibly effective.  Why?  Because, as I said above, you are increasing dynamic strength, which is the very specific type required for an explosive baseball swing.

What does the science actually say?  Watch this video

Watch this video for a quick overview of the what the science says about how to increase your bat speed.  It specifically covers overload / underload training, including the recent studies that have been done.

In the 1970’s and 80’s, the Soviets did studies with their Olympic athletes, mostly with athletes that were throwing things… hammer, discus, javelin, etc.

They would have them throw heavier than usual item in order to build strength.

Then have them throw a lighter one, for building fast-twitch muscle fiber… AKA improving speed and velocity.

Here’s the summary of key training principles they discovered

The concept of overload and underload training has been studied a number of different ways.  Here’s some more interesting tidbits.

Does training with a “heavy bat” cause bad habits?

Yes it CAN, if done with the wrong type of heavy bat.

Longer answer… Some people will say that training with a heavy bat is bad, that it will hurt your mechanics or cause bad habits – or even make you slower.

The truth is that there is some debate about the best TYPE of heavy bat to use for overload training.

The biggest question is about how the weight should be distributed.  Some people are perfectly happy to use anything weighted, such as a sledge hammer.  Or a weight on the barrel of their regular game bat.   However, that causes problems when it comes to hitting mechanics, and can actually result in bad habits that slow the swing.

Nothing robs your baseball swing of power faster than losing the “whip” in your swing.

Do you know why a whip makes a cracking sound?  (Think of that iconic cracking sound you heard whenever Indiana Jones used his whip to knock away the bad guy’s weapon)

It makes that sound tip is actually moving faster than the speed of sound and creating a small sonic boom. We humans can’t move our arm that fast, but we can move the tail end of a whip that fast.

It’s because the “whip effect” magnifies the initial effort.

In the case of of the whip, the tip is moving 30x faster than the original speed generated by the arm motion.

As baseball players, we want to use the same “whip effect “to increase bat speed.

The opposite of a whippy swing is a “push” swing, where you are using your large muscles to swing the bat, but not taking advantage of the extra speed that comes from a ground up kinetic chain that ends with a whipping motion.

What does this have to do with “heavy bat training” ?

Bats that have the weight loaded on the end – near the barrel – are going to cause you to lose the desired “whip” and instead develop those slower push style mechanics.

Bats that have the weight closer to the hands do they opposite.

When the weight is near the hands, it promotes better mechanics and can actually increase bat speed just from the mechanical improvements… before you’ve made your muscles any stronger.

That’s why some of these heavy bats can say “Add 3 mph to your bat speed in 10 days”  Because even though it takes 6 to 8 weeks to muscle adaptation (aka get stronger) a good heavy bat can do more than just build strength.  There are several heavy bats on the market that actually improve mechanics rather than hurt them, and that’s when you tend to see those quick gains in bat speed.

Ended loaded weight.  As we just discussed above, bats that have the weight mostly in the barrel are going to encourage the “push” style swing that is slower and will do the complete opposite of what we want.

Can’t hit a real baseball.  Another problem is that you can’t actually hit a baseball with them.  One study clearly demonstrated that hitting a baseball with the heavy bat yielded much better outcomes than just taking dry swings.  It’s impossible to know for sure why this is the case, but it feels pretty obvious.  It comes down to effort and intent.  Just swinging isn’t the same as swinging with real intention and purpose. 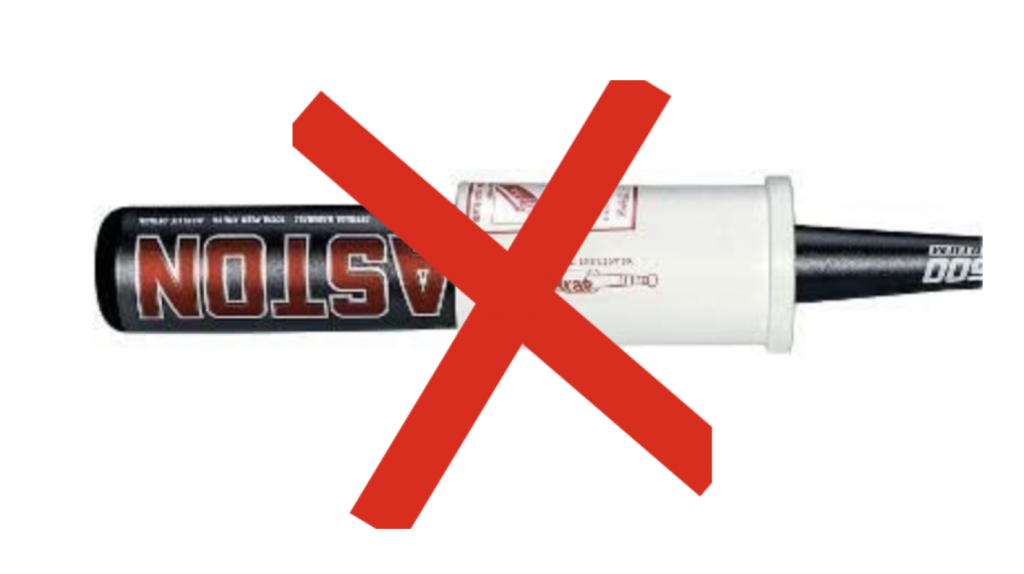 Traditional donuts are not good option for Overload training

When choosing the right training bat ***especially a heavy bat*** you need to ask yourself a couple important questions:

So with that in mind, the bats listed below were chosen because they pass those 4 tests, (and because reputable, trustworthy instructors are actually using them).

[box]  NOTE -The links on this page are affiliate links.  That means if you click them before you buy, a portion of your purchase will go to helping us keep the info on this website free for everyone (and it won’t cost you anything extra at all).  With that in mind, thank you for clicking our links and supporting what we do at Pro Baseball Insider! [/box] The ProVelocity training bat comes with a hefty price tag, but for good reason.

This bat is really, really unique. It uses resistance bands to change the difficulty level.  That it makes it adjustable, which is something no other training bat that I’m aware of can say.

How to buy the ProVelocity Bat

The Camwood Training Bat is a solid hardwood bat.  It’s design is a HUGE improvement over heavy bats from the past.  This video explains it better than I could

Pros for the Camwood Bat

Cons for the Camwood Bat

In case you’re tempted to distrust marketing video (like I am), here’s Tony Gwynn talking about what he loves about the Camwood Bat.

Side note – What I thought was really funny about this video with Tony is that he doesn’t even mention using the bat for heavy bat / overload training.  It does do that, and builds strength for more powerful hitting, but Tony was pumped on it for a different reason.

Where to buy the Camwood Training Bat

I recommend getting it from Tanner Tees for 2 reasons.  One is the same as I mentioned earlier… family-run company and free shipping.

The other is because Amazon makes it a lot tougher to find your size, since each size is different listing.   Tanner Tees has a drop menu with all the options, which is way easier.  ***Just choose the one that is the same size as your regular game bat. **** 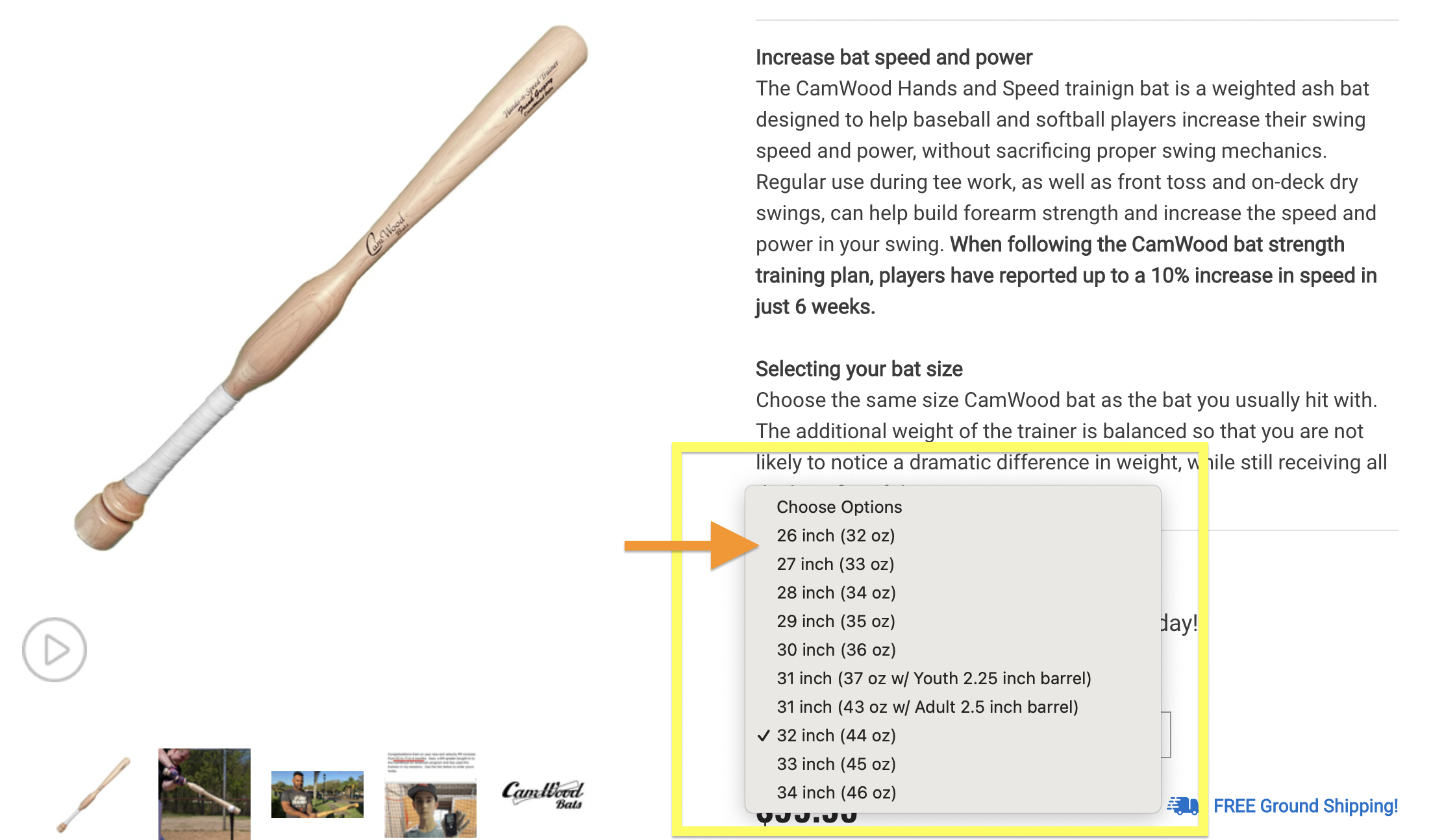 The Hitting Knob uses the same logic as the Camwood when it comes to putting extra weight near the hands (it naturally trains hitters to use a better hand path and whip the bat properly).   The difference is that the Hitting Knob goes on your own bat instead of a separate training bat.

Here’s a quick demo of how the Hitting Knob works: Pros for the Hitting Knob

Cons for the Hitting Knob

I gotta be honest, when I first saw this bat, the word “gimmick” flew into my mind.

It’s a “feel to learn” type of training bat, which I love.  (By the way, so are the rest of the training bats on this page.)

In the video below is a little girl using the youth sized Sequence bat.  As you can see… just by using the bat correctly ( the wooden mallet is flat/parallel to the ground), she  is automatically put in a good hitting position.

The reason I love “feel to learn” training aids that there are just some things that are REALLY difficult to explain to a hitter with words.  It’s so much better when they can feel it for themselves.  And with the 2 handles, the hitter feels hand position and sequence in an exaggerated way that really drives the point home in a memorable way.

Pros for the Sequence Bat

Cons for the Sequence Bat

So which of these training bats would I recommend?

That depends.  If you have the budget, it would be nice to have all 3.

But if I were only to pick one…

I love how the ProVelocity training bat can be adjusted based on the strength of the hitter or what specific thing you’re working on.  Also, it’s metal, so I don’t have to worry about breaking it.  And finally, the mobile app tracking my improvements is what puts me over the edge, despite the much higher price tag.

For me, the Camwood and Hitting Knob are “neck and neck”

I love how they’re both “feel to learn” tools.  Just having the weight near the hands helps hitters create “whip” in their swing, which is basically the Holy Grail of hitting.

I also love that the price is less than a quarter of the ProVelocity.  So if your budget is tight, definitely go with one of these.

Below are some of the studies conducted on the question “How to increase bat speed” and if overload / underload training really works for helping baseball and softball hitters accomplish that goal.