Cardinal’s Hitting Coordinator and former MLB outfielder Derrick May, shares pro baseball tips for players who want to make it to the big leagues. 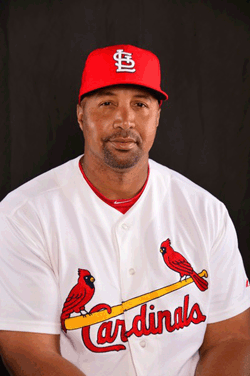 Derrick May knows baseball. He spent ten years playing outfield in the Major Leagues, and longer than that as a manager/coordinator in the Saint Louis Cardinals organization. Additionally, he comes from a baseball family. His father also played Major League baseball, and his brother is a scout for the Blue Jays.

Currently, May is in his 6th year as the Cardinal’s minor league hitting coordinator. If that doesn’t impress you, think of it this way… More than 100 professional baseball players – that is who May is currently responsible coaching in baseball batting mechanics, mental approach, strategy, and more. The Cardinals have invested A LOT of money in drafting good players, and it’s May’s job to make sure they’re ready for the Big Leagues.

We interviewed May by phone as he is in sunny Jupiter, FL, for spring training.

1 – In your experience, what is the top reason exceptionally talented players NEVER MAKE IT to the big leagues?

Derrick May:  The number one reason you see a players that have the talent to play at the MLB level and don’t make it is because the work ethic isn’t there.  If  you stop being hungry to improve or have the attitude that you are already good enough, your career in baseball won’t last long.

Also, it is very important for players to be aware of their outside influences.  Who they hang around will either inspire them to be better and work harder, or will be a distraction.

Other common reasons, talented baseball players don’t make it all the way are (1)  Lack of support;  and (2) Not having a smart off-season.  That is, they don’t have a smart off season strength and conditioning program and they aren’t eating well and taking care of their bodies.  If you don’t take care of your body, you’re asking for an injury.

2 – Are there things a player can do to increase their chances of being seen/drafted/ picked up by a team – or is it really just as simple as playing well, even if you are playing in a secondary baseball school?

Derrick May:  I’d like to say it’s that simple.  I think maybe it used to be.  But now days I think it does help to go to a showcase or MLB camp or tryout so you can be sure to play in front of scouts.

If  you stop being hungry to improve or have the attitude that you are already good enough, your career in baseball won’t last long.  – Derrick May, St. Louis Cardinals Hitting Coordinator
It helps to play summer ball too.  A lot of good can come from playing summer ball, including more exposure as a player, getting accustomed to a wood bat, and hopefully playing stiffer competition.  But I also would like say that it’s not good to play so much that a player gets burnt out or injured.  Especially if we’re talking about playing for travel baseball teams.  This is a little off topic, but I also think it’s important for kids to play a variety of sports, especially early on.  Variety is good for helping a player to become an all-around athlete.

3 – What is the one thing you wish someone had told you when you were young that you had to find out as a professional player?

Derrick May:  I’m going to emphasize what I said earlier.  Who you’re around, the kind of people you hang out with, matters.   It’s important to hang around like-minded people… friends who have the same values and want the same thing you do, and push you to accomplish your goals.

4 – If 2 players have equal talent/stats, what makes one more desirable than the other? What do you look for to set them apart? (Eg. Size, speed, age, intangibles)

Derrick May:  There are a number of separators we look for.  One of the most important is work ethic.  A lazy player is less likely to be able to make the jump to the Major Leagues, to stay healthy, or even to make the kind of plays on the baseball field that require hustle.  Other considerations are thing like attitude – is he teachable?  Will he be a good teammate?

5 – Besides talent (obviously), to what qualities, moments or decisions do you attribute your success in baseball?

Derrick May:  Mostly just hard work and determination.  Rather than being discouraged by failure I was determined to learn from it and get better.  Getting better everyday was important to me because I never thought I was good enough.  I was teachable and always learning, but at the same time  I also think it’s important to know who you are as a player.  That way, while you are learning and improving, you are becoming the best version of yourself, rather than what someone else might try to make you and it’s not right for you.

Part 2 – Coming soon – Derrick May on hitting mechanics and mental hitting strategy.   You can subscribe to our email list to be notified of new pro contributions.

This is how we notify you of new, free video or articles we've added to the website. We promise not to spam you or share your info.