In this video, Major League catcher Ryan Lavarnway shares a progressive series of receiving drills for catchers , designed to improve hand strength, hand/eye coordination, receiving angle… and even some framing to get more pitches called in your favor.

A receiving drill for ANY age

A receiving drill for ANY age – Whether you’re a big leaguer like Ryan or just starting out youth catcher, this drill can help the ball STICK in your glove… improves technique, hand strength, glove angle, and even a bit of framing to get more pitches called in your favor! #morestrikes #captainoftheteam

If you haven’t already, pick up Ryan’s cheatsheet for perfect blocking form, click here: https://probaseballinsider.com/perfect-catcher-blocking-checklist-2 to keep those baseballs from getting past you or rolling too far away

Posted by ProBaseballinsider.com on Sunday, February 11, 2018

So the first thing I wanted to cover today is a couple of receiving drills for catchers at any age… whether you’re a 5 year old just picking up the game or the things that I do in Major League spring training.

You’re a catcher, so catching the ball is one of your most important jobs, right?

So the first thing is to think about, where do you want to catch the ball in your glove? You want to catch it in the pocket. More specifically, we can train that by using a barehand receiving drill for catchers.

So what we want to do to train that is to take the glove off and work on receiving it these three fingers.

The progress below goes from beginner to advanced.  That’s not to say that you should skip the beginning steps if you are an advanced baseball catcher already.  They make a great warm up if you do a few and then move to the next step.

We’re going to practice catching it both strong and soft.

That might sound like opposites, but it’s really not. Another way to say it is to keep your hand still.

Don’t stab at the ball, and don’t try to cradle it like an egg. Keep it still, and that is the first step in making it look good.

That is the main thing to focus on in step one – receiving the baseball soft and strong.

Umpires have a tendency to call strikes when the ball squares up the catcher. So that’s our job. The next step in using this as a framing drill is to move it slightly – just a little – back toward the strike zone.

Restricting your fingers so that you have to catch the ball in the right part of your hand AND at the proper angle. The angle of receiving is probably the number one mistake that I see young catchers making, and this will help with that.

This is a drill we do in Major League spring training. It helps to strengthen your hands and get them ready to receive. This will be tough to do for young players with small hands, but if you can, I recommend you try it.

Replace that golf ball in your hand with a baseball, and then work on receiving a 2nd baseball without dropping it.

Again, don’t stab at the baseball (that will lead to mistakes… don’t do that!) Also, don’t try to soften it by bringing it to your body. It’s not an egg. The ball’s not fragile and it’s not going to break. Catchers, focus on receiving soft and strong in these drills.

In your receiving position, catch one ball, and then immediately manipulate the first ball into the side of your hand to make room to catch the 2nd ball.

(After doing this, you’ll be amazed at how much easier it feels to catch the ball with your glove on again)

The final progression of these receiving drills will be tough to do for young players with small hands, but if you can do it, I recommend you try it. 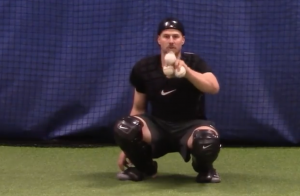 The final, advanced progression of these progressive receiving drills for catchers

Go out there and have fun with this one! It’s a great drill for catchers to work on receiving at the proper angles, instant feedback to improve hand/eye coordination, hand strength, and a bit of framing too.

Did you make it to the final progression? We’d love to see it! Post a video link in the comments, or tag us on Twitter (@lowliners) or Facebook (@probaseballinsider)

Have fun and play hard!

—-
Who is Ryan Lavarnway?

Ryan Lavarnway put together a simple tool to help you become a better blocker.  This checklist for perfect blocking form can help avoid those embarrassing past balls, and also can help you control the baserunners by keeping blocked balls closer to you.

Just enter your name and email address and we’ll send it to your inbox.

Success! Now check your email to confirm your subscription.