Having been a hitting instructor for the past 11 years working with players from MLB down to the high school player, I can tell you that I have seen a lot, and learned a lot.  I have thrown a lot of things against the wall and seen what has stuck for guys at the highest levels and for those who are just beginning their careers.

The most glaring thing that I have personally seen over the past 11 years is the how the younger hitter may know how to swing, but they do not necessarily understand how to hit a baseball.

Have you heard somebody say “Man, that guy is a good 5 o’clock hitter.”  I know I have!  Do you know what that means?  Simply put it’s a hitter who can really swing that bat during BP (which for a 7pm game takes place roughly around that 5pm time), but can’t sniff a hit or make decent contact during the game.

You may be thinking, how can this happen?  His swing is obviously good if he can take a good BP!

Herein lies the problem I see with most young hitters.  They have been privately trained by a hitting instructor, or by their high school coach, and/or Dad.  They work tirelessly on the mechanics of their swing.  While there is a priority and honor to getting the player’s swing as good as it can be, many don’t get to, or lose sight of the fact, that they need to teach the player how to USE that swing during the games!

Their swing looks great for the Perfect Game Showcases that many young ballplayers attend.  They will pass the showcase “eye test.”  In 10-15 swings during BP they can look like the next Albert Pujols.  But some of them, once they get into games, will look like a National League pitcher facing Justin Verlander.

So what is missing?  The player knows how to SWING, but doesn’t necessarily know how to HIT a baseball.

Some of you are probably scratching your heads.  “Isn’t that the same thing?  I swing to hit KW.  I’m not following you.”

Take your favorite car in the world.  This is your dream car.  A Mercedes, Ferrari, Dodge Dart….. it doesn’t matter.  You’ve been raised on an automatic transmission, but they only are selling your dream car in a stick shift.  Here’s the problem: You don’t know how to drive a stick shift!  That car is going to be looking really nice in the garage until you can learn how to drive it.

Your swing is like that car.  It looks nice.  People compliment you on it.  You can show it off to anyone when it’s “housed in a cage.”  But when you bring it into a game, you don’t know how to “drive it” yet.

So where do you begin?  That’s a bit of a loaded question, but in my eyes I like to begin with explaining to a hitter who is really in charge here.  Is the pitcher in charge?  Not in my eyes.  Is the hitter in charge?  Yes indeed.

Look at it this way.  The pitcher has the very difficult job of throwing a round object into an “area” that consists of a home plate that is 17 inches wide.  The hitter, however, has roughly an acre to hit this ball into on a big field.  I do not have a college degree, nor am I a math wiz, but by my rough calculations I would have to say that the hitter has the upper hand here!  So walking up to the plate with even this little bit of information can give the hitter some confidence.

I believe there are two things that a hitter should walk up to the plate trying to execute during a game (not including some situational hitting opportunities of course).

Put the best swing on the best pitch you can find.

That’s it!  Sounds simple doesn’t it?  Almost too simple to most the first time they hear it.

No matter what level you play at (MLB or HS baseball in South Dakota) you can have this plan when you’re in the box and will have more Quality At Bats then you’ve ever had before.

Hit What You Want

Where is that area?  I can’t really tell you because that’s something that I tell the hitter to pick out.  It’s not a postage stamp sized area.  It’s a area (or zone) in which we like to make contact with the ball.  This includes allowing the fastball, curveball, changeup, slider, cutter, sinker, etc  to get into our “area.”  If these balls do not enter this area/zone, then we simply lay off them (even with less than 2 strikes and it’s called a strike).

This allows the hitter to “slow the ball down” and makes pitches look less of a threat than they really are.  Fastballs slow down.  Curveballs don’t break as hard.  Sinkers don’t sink.  I think you get my point.  But the main thing with hitting out of your area/zone is to be prepared to put your barrel on anything that enters that area/zone.

The confidence that you will be able to handle any pitch that enters your area/zone, is going to keep you on time and aggressive. 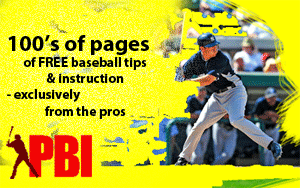 Have you checked out our FREE baseball tips from the pros?  100’s of pages of video, tips and more

Let Balls Run Into Your Swing

Most young hitters want to swing hard and drive the ball.  While in theory this sounds good, in practice this can get the young hitter in trouble.

For one thing, most hitters lose control of their barrels.

They won’t see this as being much of a problem when they are younger, until they enter a level where the ball runs, dips, dives and moves on them like never before.  Simply put, the ball has no chance of running into their barrel because the hitter has taken it out of the zone just as quickly as they have put it in.

What the hitter quickly finds out is that they need to put their best swing on the ball and let the ball naturally run into their barrel.  Does this sound too easy?  When I first heard it as a player, I didn’t believe it.  That was until I trusted guys who had been where I wanted to go and said to myself “If they’re doing it and making good money, then what’s they worst that happens to me? I miss-hit another ball?”
[box]Check out these hitting tips: 7 Checkpoints for a Good Baseball Swing.  Do you do these 7 things?[/box] This purpose to hitting allows the hitter to do a number of things, but most importantly it allows them to put a complete swing on a ball, keeping their barrel in the zone for the longest amount of time possible.  Their range expands at the plate too, as their swings reach balls on the plate that they may never have barreled up before.  They stay more balanced and hit from the same spot because they aren’t trying to outwork the ball.  As a result, they simply put a nice controlled swing on something.

So in summary, I hope you have read this and either found yourself as one or the other.  If you’re just a swinger, hopefully this opens your eyes to understanding a little more about how to be a hitter.  If you’re a hitter, then keep up the good work!

More free hitting tips and instruction from the pros: