As I explained in my intro to this series on separators, in baseball it’s very often the little things that separate you from your competition.  I have seen many players outplay others with much higher talent ceilings and superior tools just because they played the game with consistency. As you look at some of the best baseball players in the world you will notice how they all do the little things (or separators) well.

One VERY important separator in baseball is throwing accuracy.

Many times when players get drafted, they get selected by projection of their “tools”.  Someone who has a better arm, runs faster, and hits the ball further will do better in the draft.  But just because someone has a better arm doesn’t mean they are a better defensive player.

It is a scouts job to project talent, and a coach’s job to hone their skills.  Now think about it from a coaching point of view: Would you rather have a shortstop with the best arm you have ever seen and have no idea where the ball is going or an average arm that is accurate every time?

Both accurate and inaccurate throws are contagious.  How many times have you seen on a double play or relay throw when the first throw is off the mark, the next throw is usually off the mark as well.  When we hit our partner in the chest our feet are in the best position to receive the throw and then make a good throw as well.

Even though you are able to do more things on a diamond with a better arm, if you can’t throw the ball where you want arm strength is irrelevant.

The great thing is that all position players can improve their accuracy whether they are in the infield or outfield. It takes pride in your preparation and working at this skill. You should make it your goal to make every routine throw hit your target. Once your throws get more reliable you will notice that the accuracy on more difficult throws will improve as well.

4 tips to improve your throwing accuracy

1. Take pride in your warm up catch. Pick out a target on your throwing partner and try to hit him there every time. A good target to try to hit every time is your partners chest. It is easy to just throw and warm your arm up without focusing on your accuracy. You should want to complete a session of catch without overthrowing or bouncing the ball to your partner. Take pride in your catch. 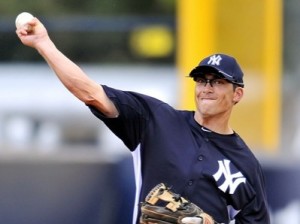 2. Get a good grip. Throwing the ball with better accuracy is much easier when you have a good 4 seam grip. A 4 seam grip is when your fingers are placed across the horseshoe of the seams and not with the seams. This will help get better backspin on the baseball and it will fly straighter.

If your grip is off, a seam could catch the air as it flies through the air and it can start moving (the same way a pitcher throws a sinker or cut fast ball). This ball action makes it difficult for consistent accurate throws.

3. Don’t rush. There is a difference between rushing and quickening up while under control. We all know what rushing feels like and looks like. We have all done it. When we rush it reduces the chances of making an accurate throw. Try as much as possible to be efficient with our steps and route to the baseball so we can make a good throw under control and not feel a need to rush. It is better for the throw to be a tick late than to rush and throw it past our target and have a runner move up an extra base.

4. Stay within your optimal effort level for making accurate throws. Most players will have better accuracy if they don’t throw with 100% arm strength. Sometimes we have no choice and have to let it fly, but on routine plays we can throw with a little less pace on our throw to achieve a higher level of accuracy. Everyone has different touch than others on their throws. Work on this when playing catch, find what speed is most accurate for you.
————————
I hope  this separator article on how to improve throwing accuracy has been helpful for you.  If so, I hope you’ll do us a favor and share it with your friends.  We’ve worked hard to create a free baseball resource where pro baseball players share their knowledge.  Now we’re hoping you’ll help us get the word out.  Play hard!  – Doug
————————-