During a fast-paced play is not the time to be trying to figure where on the field you need to be.

Knowing where on the field the first baseman should be for each situation allows the team to work together fluidly in high-pressure, fast-paced situations. Letting the score, situations, and hitter dictate where you need to position yourself is something that is learned. Knowledge of how baseball situations should dictate your defensive positioning at first base will let you use external factors in your favor. 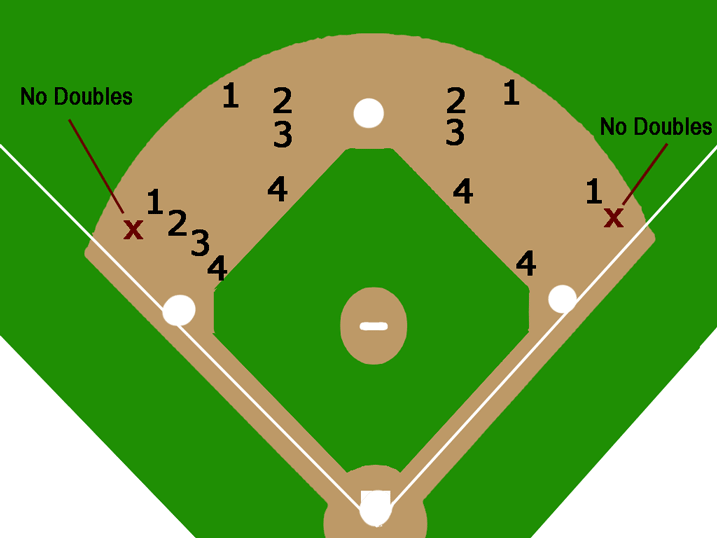 Position 1, Standard Depth: When there is no one on base, you will normally play deep – that is, 15 to 20 feet behind the base. See #1 on the diagram below.

Keep an eye on the second baseman, just in case he needs to communicate a set up and to make sure you aren’t playing too close together. Your setup will vary a little based on the hitter and the game situation.

Facing a lefty hitter, you want to be back and about ten feet from the foul line.

Facing a righty, you can move further off the line because less there is less of a chance that he will hit a ground ball to first base. This means it is more useful for you to focus on plugging the hole between 1st and 2nd.

Runner At 1st Base

Position: The first baseman will be holding the runner on at first base. If you are unsure of how to do this, click to read more about holding runners on first base.

You will be holding the runner on at 1st base.

Never forget that your first responsibility is to cover the first base baInfield in, No Doubles, and other First Base Positioningg.

The further you move away from the foul line, you should also move closer to the hitter. If you do not do this, you may find yourself further away from the 1st base bag than you intended.

Positioning is flexible as long as you feel confident that you can get back to the 1st in time to receive a throw.

Runner At 1st And 2nd

You will either play behind the runner at 1st base, or if you need to keep a run off the board you may play in front of the runner. From either of these spots you can let the ball dictate whether you are going to come home with the ball, go to 2nd, or just get the out at 1st. The score, inning, and number of outs also play a huge role in your decision.

Same as Runners at 1st and 2nd.

Base runners or not, it doesn’t affect this positioning. No Doubles is a the setup sometimes used when the score is tied, or when leading by 1 or 2 runs in the 8th or 9th inning. The idea behind this positioning is if we are going to give up a hit they are only going to get a single and not be able to stretch it into a double.

As a 1st baseman, you will play closer to the 1st base line than normal – roughly 5 to 6 feet. Make sure you are close enough where a ball will not get between you and the foul line. In this alignment you will give up a ground ball in the 3-4 hole but nothing down the line.