Knowing when to throw with a long hop is a big part of being baseball savvy.  Using the long hop is another separator – a small thing that can have big results – and here are some throwing tips for how and when to use it, plus a drill ideas for practicing this skill.

It is frustrating to watch a game and see an outfielder come up throwing to a base and watch him short hop his target. The short hop is not easy to catch.  Many times it bounces away from the person receiving the throw.  This allows runners to move up and usually score.

Outfielders & infielders need to understand how to use a long hop to their advantage.[box]

Why using the long hop helps:

Using a long hop correctly is a separator that allows

How it usually happens

When there is a play at 3rd or home, outfieldersoften think they can throw it all the way in the air to the target.  The throw comes out of the hand too high for the cut off man to handle and lands just short of the target.  This makes for a difficult short hop. 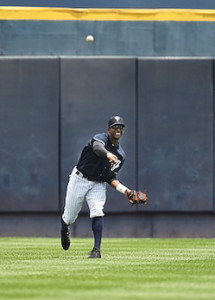 Tips for throwing and using the long hop. Image by Frank Lauri

Unless the receiving infielder makes a great play, the baseball will usually bounce away allowing for the base runner(s) to move up to advance and in many cases score an unnecessary run. Using a long hop is not an attack to your manhood. It doesn’t make your arm look any weaker.  What it does do is make you look savvy.   It shows you understands how important it is to keep the ball down to either (1) let the cut off man redirect the baseball or (2) give your fielder an easier catch and best chance to make a tag. It’s even more difficult catching balls with a catchers mitt, so creating a long hop is especially important on throws to home plate.  A catchers mitt is not designed to pick short hops.

What is the perfect long hop

When playing catch separate some time for long toss. Now take your hat off and place it about 15 feet in front of you, have your partner do the same. Throw the baseball and try to hit the hat. This should be your target for a nice long hop. This is a good way to visualize and get a feel for using it.  Now take it out to the field when you are working on your other throwing drills (outfielders throwing to bases, infielders throwing to bases on relays).

When to use a long hop in baseball